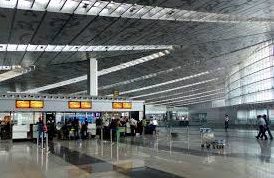 The NSC Bose International Airport authorities have refuted media reports of two positive cases being detected at the Kolkata airport. The authorities have clarified that three passengers had been sent to the Infectious Diseases Hospital in Beliagata as “suspected cases” during the week.

“Media reports mentioning about coronavirus cases detected at NSCBI airport is totally wrong and baseless,” the airport’s official account on Twitter mentioned. Altogether 21,792 passengers had been screened so far, they added.

Three Indian passengers travelling from Bangkok had been sent to the hospital during the week. Earlier, three persons from Kerala had been diagnosed with the virus but only after reaching their homes in Kerala via Kolkata. Those were the three reported cases of Coronavirus in India.

Meanwhile, Union Minister of Health and Family Welfare Harsh Vardhan on Thursday said there was no need for people to panic. He added that screening is being conducted at 12 major and 65 minor ports and 402 people who were quarantined along the Indo-Tibet border have tested negative and their conditions are stable. He said that the three persons from Kerala who were earlier diagnosed are now stable.