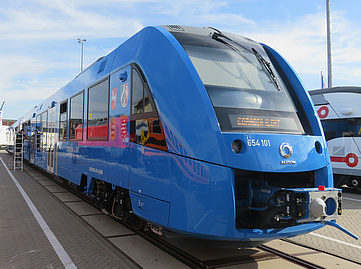 Germany has launched the world’s first hydrogen-powered train on September 16, 2018. The train, built by French train-maker Alstom, started operating on a regular service in northern Germany from September 17 through a 62-km line.

The Coradia iLint – nicknamed Hydrail – are the first two among Germany’s network of hydrogen trains that are zero polluting quiet trains. The trains can carry 300 passengers, with seating arrangement for 150 passengers.

The train moves from electricity produced in fuel cells by a combination of hydrogen and oxygen. It produces steam and water as emission, which is therefore an answer to pollution. There is thus no emission and very little noise.  The excess energy produced is even stored in the batteries. The trains can be refuelled at hydrogen stations.

While hydrogen trains can be more expensive than diesel trains, the former has a distinct advantage. Hydrogen fuel cells are way better than batteries, say experts, because instead of recharging, they can simply be refuelled.

Other countries eager to introduce hydrogen run trains are France (where plans are already afoot), Britain, Denmark, The Netherlands, Canada, Norway and Italy among others.