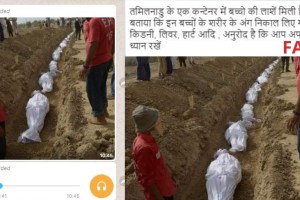 Child abduction rumours have once again revived on WhatsApp. A message doing the rounds on WhatsApp groups claims that bodies of children, who were abducted, have been recovered from inside containers, and that their internal organs were found missing. The message has been shared in the form of an audio clip, and is accompanied by a photograph which shows dead bodies lined together in a grave.

Translation: “Tamil Nadu police found bodies of children inside a container. Internal organs were removed from their bodies, like kidney and liver. Tamil Nadu police has said these children were abducted from various countries and brought here. Note: Take care of your children. Send this message to every group. Spread this photograph so much that this dog is caught. Who does not circulate this is not his/mother’s child. Send this to as many groups- 1, 2, 3, 4, or 25. This rascal must be caught.”

The message and photo have also found their way to Facebook. Alt News has decided not to post the audio clip, for fear of misuse.

The photograph showing dead bodies in white shrouds, shared along with the message is from June 2015. It was clicked in Pakistan.

According to Getty Images, where this image is available,“Pakistani Edhi charity volunteers bury the bodies of unclaimed heatwave victims at a graveyard in Karachi on June 26, 2015. Pakistani welfare volunteers on June 26 held a mass funeral for 50 victims of Karachi’s worst heatwave in decades, whose bodies had gone unclaimed.”

In the aftermath of the IAF airstrike in February 2019, this photo had been shared as ‘proof’ of casualties caused by the attack. Alt News’ fact-check can be read here.

Alt News found that the exact message had been shared earlier as well, in 2017. The photograph accompanying it, however, was not the one being shared now.

According to the fact-checking website Snopes, the above photograph is actually of the aftermath of the Ghouta chemical attack of 2013, in Syria.

Child abduction rumours were rampant in April-May 2018, which resulted in a spate of mob lynching incidents in various states. Alt News had found that these rumours followed a highly customised pattern; the language and places referred to in the viral messages would be altered depending on where the message is being circulated. These rumours were viral across the country, from Uttar Pradesh to Gujarat to Tamil Nadu to Odisha. These messages had taken a communal turn, when Rohingya Muslims were targeted in July 2018 as child abductors.

Users of messaging and social media platforms are advised to be extremely circumspect with regard to such messages, and not forward them.