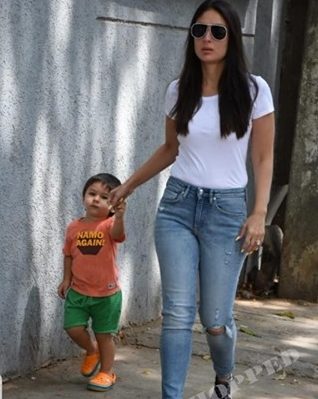 The photograph of Taimur has also been shared on WhatsApp with the same caption – ‘Taimur Ali khan….Not to miss his T Shirt’.

A close look at the image is sufficient to infer that it is a work of photoshop.

The original image was found upon reverse-searching the photograph on Google.

When both the photographs are juxtaposed together, the difference is clearly visible. In the original image, Taimur’s T-shirt does not have a ‘NaMo Again’ imprint.

Earlier, a photograph of Bollywood actors Deepika Padukone and Ranveer Singh was also photoshopped in a similar fashion.