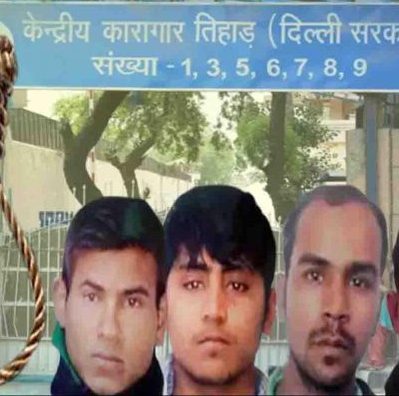 The four death-row convicts in Nirbhaya gangrape and murder case await their execution on Friday, March 20, as they were informed on Thursday that no petitions by them were pending in any court. The timing of execution has been set at 5:30 am.
A Delhi court was informed by public prosecutor that the mercy plea of all four convicts had been considered on all valid grounds. Akshay and Pawan had filed for a second mercy plea on Tuesday. The court was also told that no petitions of any of the four convicts in the case were pending in any court.
Earlier in the day, the Supreme Court dismissed Pawan Gupta’s petition claiming he was a juvenile at the time of the crime. The decision was taken by a six-judge bench headed by Justice NV Ramana.
Akshay Thakur, Vinay Sharma and Pawan Gupta had moved court on Wednesday to stay their execution on these grounds. The fourth convict in the case is Mukesh Singh.
Six persons were arrested and charged with rape and murder of a 23-year-old medical student in Delhi in 2012, which came to be known as the Nirbhaya case. One of the accused was a minor and was tried in the juvenile justice court. He was released after three years. Another accused – Ram Singh – had allegedly committed suicide in Tihar Jail.
national newsNirbhaya caseSupreme CourtTihar Jail