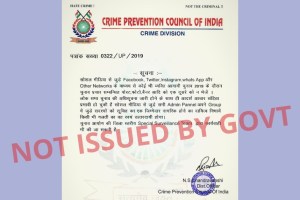 A letter viral on social media, with many presuming that it is a government order for social media users, is notifying people to abstain from using Facebook, Twitter, WhatsApp and Instagram to share political propaganda posts before the 2019 elections. “Do not share election-related posts, photographs and posters,” reads the ‘notice’ circulated under the name of ‘Crime Prevention Council of India.’

Several social media users have shared the notice assuming it to be a government order.

Many individual users have also sent queries to Alt News regarding the authenticity of the letter.

Not issued by the government

The URL of the ‘Crime Prevention Council of India’ ends with a ‘.com’ while websites of the Indian government either end with a ‘gov.in’ or ‘nic.in’.

The website of any organisation affiliated to the Indian government ends with a ‘nic.in’. Domain name ‘nic.in’ is owned by the National Informatics Centre (NIC), which is the science and technology organisation of the Government of India under the Ministry of Electronics and Information Technology. ‘Nic.in’ can be allocated only to Indian government entities. For instance, Central Board of Secondary Education (cbse.nic.in), Indian Institute of Mass Communication (iimc.nic.in).

What is the ‘Crime Prevention Council of India’?

The organisation is a non-governmental establishment. “We are an NGO that works towards reducing crime in the country via awareness programs, workshops, seminars, etc. A lot of our work also involves partnering with the government,” said Dr SK Pandey, Chairman of CPCI, to Alt News.

“The letter viral on social media was wrongly issued by a member of CPCI and not the organisation. He should not have issued the letter as a ‘notice’ but only as a suggestion in public interest. The concerned person – District Officer Narendra Singh – has now been terminated from his position and is not associated with the organisation any more,” added Dr Pandey.

Dr Pandey has also issued a letter on behalf of CPCI, clarifying that the earlier ‘notice’ was not issued by the organisation but a faulting district officer who has now been recused from his role. The letter also mentions that the Crime Prevention Council of India is a non-governmental organisation.

The letter doing rounds on social media, notifying people to abstain from posting political propaganda content before the elections, was, thus, not issued by the government. It was merely a suggestion in public interest issued by a member of a non-governmental organisation. The NGO has, however, informed that the concerned member wrongly issued the letter.

Despite the illusion of a government notice, social media users could have avoided falling for the letter by carefully analysing its tone and the organisation’s website URL provided at the bottom. Even though the letter gave the impression of a warning, it did not mention ‘Government of India’ or the name of any ministry. Moreover, the URL provided at the bottom ended with a ‘.com’ domain, which was sufficient to establish that the organisation was not a government entity.