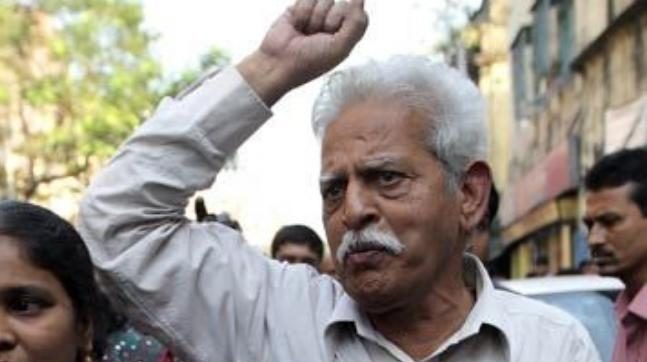 In a series of several illegal acts based on a concocted letter, Pune police with the help of Telangana police arrested revolutionary poet and public intellectual Varavara Rao in Hyderabad on Tuesday, after keeping him and his wife incommunicado for about eight hours.

Some twenty men and two women claiming to be from Pune Police Task Force and Telangana Police, in mufti, barged into Varavara Rao’s house in Gandhi Nagar in Hyderabad around 6 in the morning and immediately snatched his and his wife’s cell phones and cut his landline phone as well as his intercom connection. The main door of the house was bolted from inside and nobody, including neighbours and domestic help was allowed to walk in the corridor or enter the house. This situation continued till 2.30 when he was taken away.

Similar raids took place at the houses of Varavara Rao’s two daughters in Hyderabad during the same time. In the houses of his daughter Anala and her husband Kurmanath, a senior journalist as well as Pavana, an English lecturer and her husband Satyanarayana, a professor in English and Foreign Languages University, about twenty policemen each, again in mufti, barged in a little later and snatching away phones and cutting all communication from outside and keeping them incommunicado happened in the same fashion. While policemen stayed in one daughter’s house for about six hours, in another daughter’s house it lasted for more than nine hours.

In the same way, Pune police barged into the house of Kranthi Tekula, a journalist with Namaste Telangana and a member of Revolutionary Writers’ Association, and stayed in the house for about six hours in the same manner.

Since the cell phones were snatched and all communication channels were cut, the news of these invasions started coming out late. Indeed, the purpose of cutting the communications channels was to prevent media from reporting and friends from gathering to protest. Even then within two hours hundreds of friends of Varavara Rao and activists of various mass organizations as well as dozens of media personnel including OB vans reached the house. Strangely, dozens of Telangana police blocked the main entrance of the apartments and did not allow media and friends to go in. Even families and friends of more than 100 other flats were subjected to harassment with blocking them. However, the place has become a virtual public meeting with dozens of activists and leaders speaking to press and live media to register their protest.

As this public protest went on for more than six hours, Varavara Rao’s wife Hemalata was let out of the main entrance around 2.30. She said that the police harassed them for all these eight hours with throwing books, tearing off personal belongings and not allowing to contact lawyers or friends. Both Varavara Rao, 78 and Hemalata, 70 are not keeping good health and are on regular medication. For eight hours they were subjected to mental agony as well.

Finally, they were given a seven page note, supposed to be a Panchanama (Seizure Report) and took their signatures. However, the way the report is made and the way their signatures were taken is atrociously illegal. As per law, any Panchanama should be written in a language known to the persons in whose house the search was conducted. But the report was written in Marathi and not even a single letter, including digits, is comprehensible to both of them. The other illegality is that both the witnesses who signed on the report were stock witnesses brought in by police from Pune, while in law it is mandatory to have local and respected witnesses. The third illegality of the report is that while the persons in whose house the seizure was made has to sign on each page, Varavara Rao and Hemalata were asked to sign on the last, the seventh page only. This gives a dubious scope that the police can doctor or include other pages in lieu of the first six pages.

The search without a search warrant, keeping people incommunicado for hours together, preventing friends, lawyers and media during the search, preparing Panchanama in an incomprehensible language, without giving an arrest warrant to family members, misleading the media and people waiting in front of the gate on the way Varavara Rao is being whisked away – every act of police was illegal, undemocratic, arbitrary, inhuman and cruel.

But then, all these illegal acts have emanated from a forged, concocted letter leaked to the media in June. The letter, ostensibly written by a Maoist cadre to another Maoist cadre contained a sentence in which Varavara Rao was linked to mobilizing resources for an assassination attempt on Narendra Modi, as claimed by police then. In fact, the police leaked three letters, two in English and one in Hindi and the Hindi letter alone mentions Varavara Rao’s name and there is nothing about Modi in that letter. In an English letter the Modi affair was mentioned but it doesn’t contain Varavara Rao’s name. That apart, several people including former judges, police officers, forensic experts, journalists covering Naxalite beat for decades have analysed the letters and said all the letters are fake, forged and concocted.

The Congress has dismissed the letters saying that they were created to lift the waning image of Modi. Thus within a week of the leaking of the letters, they have become a matter of ridicule in media and that may be the reason the police did not take any consequent actions. Now, after three months, with a belief that people might have forgotten the “fakeness” of the letters, they are again resurrected and a nation-wide swoop on defenders of people’s movements was initiated. Those in power do not want any dissenting voices in society and want to silence all those who are giving voice to the voiceless.

(The author is nephew of Varavara Rao)