Amphan effect: 5 crore mangroves to be planted in the Sunderbans 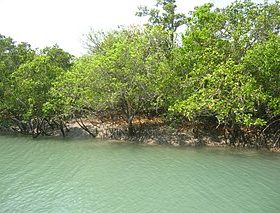 The West Bengal government has decided to plant five crore mangrove trees in the Sunderbans in order to make up for the damage caused by the cyclone Amphan. The areas where the cyclone has hit will be rebuilt with new mangrove plantation. The state forest department will be planting five crore mangrove trees in the Sundarbans from June 5, chief minister Mamata Banerjee said at the state secretariat Nabanna on Wednesday.

Mangroves not only protect the environment but it also protects the embankments. “The people of Sunderbans live among the sundari trees… mangrove is the beauty of the Sundarbans,” said Banerjee. The planting of mangroves will be significant on June 5, which is marked as World Environment Day.

Nearly 1,600 sq km of mangrove area out of 4,000 sq km has been destroyed by the cyclone Amphan, which accounts for nearly 40 per cent of the total mangrove area here, making environmentalists worry about the future of the area.

The mangroves protect the coastal areas from the onslaught of cyclones and tidal surges by reducing the impact of the waves. Damage to the mangroves means serious hazard to the lives and livelihoods of people living in and around the Sunderbans.