BJP’s Sayantan Basu threatens “encounter”: if we come to power, there will be many Vikas Dubey-like “accidents” 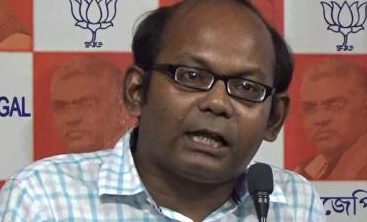 West Bengal Bharatiya Janata Party (BJP) general secretary Sayantan Basu threatened that if the party comes to power in the state, many will face what Vikas Dubey did in Uttar Pradesh.

Dubey, a gangster-turned-politician based in Kanpur of Uttar Pradesh, was killed in an encounter with the police in July 2020, after the police vehicle in which he was being taken, met with an accident. “If we come to power, many will face what Vikas Dubey did in UP,” Basu threatened on Tuesday in Howrah. It is being speculated that he meant Trinamool Congress MLA Arunava Sen, though Basu did not mention him by name.

Basu was in Howrah at a meeting organised by the BJP to protest the killing of party worker Kinkar Majhi, who was shot dead. The BJP had called a 12-hour bandh in Howrah’s Bagnan to protest the killing. Many other senior BJP leaders including MP Arjun Singh, were present at the meeting where Basu threatened about the “encounter” killing.

He said that Majhi was killed by Trinamool goons. “The police have not arrested the killers. Instead, our leaders and workers have been arrested. They must be immediately released,” Basu said. He said that people very often hear about “car accidents” in UP. “I promise, if we come to power, we will make many face what Vikas Dubey faced. I guarantee this,” Basu said.

The BJP general secretary further added that “those wielding power in Howrah’s Bagnan” should know that BJP has control over many goons. “Have you heard of Yogi Adityanath in Uttar Pradesh? There were many such goons in UP as well. These goons don’t even want bail to be released from prisons, for who knows, if they come out, the vehicles they are travelling in could meet with an accident! That’s why I am warning you all,” Basu said.