In the morning of May 15, BJP’s national IT cell in-charge, Amit Malviya tweeted an alleged ‘first-person’ account of a student of Vidyasagar College about the violence that erupted in the campus during BJP chief Amit Shah’s rally. “He recounts how TMC hooligans orchestrated vandalisation of Ishwar Chandra Vidyasagar’ bust inside the college for their petty politics,” wrote Malviya. 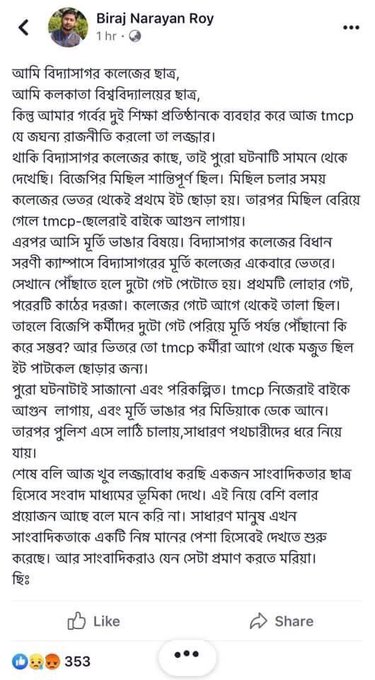 First person account of a student from Vidyasagar College. Original post in Bangla and translation alongside. He recounts how TMC hooligans orchestrated vandalisation of Ishwar Chandra Vidyasagar’ bust inside the college for their petty politics. #SaveBengalSaveDemocracy

According to the Facebook post shared by Malviya, one Biraj Narayan Roy claimed that the violence was instigated by TMCP, the student wing of the Trinamool Congress. He alleged that bricks were thrown at the rally from inside the campus and TMCP members set ablaze motorcycles and vandalised Iswar Chandra Vidyasagar’s statue. The purported student claimed that BJP workers could not have desecrated the statue as it’s located deep inside the campus. “You need to cross two gates – one iron and another wooden door – to reach the statue located completely inside the college premises. And TMCP was already inside the campus with bricks,” he wrote.

Sharing screenshot of a FB post by a student who explains what exactly happened at Vidyasagar College yesterday during Amit Shah’s road show. TMC is Bengal’s Taliban

Incidentally, Biraj Narayan Roy’s Facebook account is no longer available. However, the same message has been shared by numerous people, with some circulating it in the first person. This was pointed out by many Facebook users.

The circulation of the identical message was also noticed by Twitter users. One of them sarcastically wrote, “Today, entire Facebook is ‘I am a Vidyasagar student’.”

CLAIM 1: First brick was thrown from inside the college campus

There are neither ground reports nor visuals circulating on social media that back the allegation that the violence was started after a brick was thrown from inside the college campus.

Local news organisation Anandabazar’s ground report shows stones being hurled inside the premises by people standing outside on the road, wearing saffron coloured ‘NaMo Again’ t-shirts. The footage does not show any person throwing stones from inside the campus.

BJP IT cell head Amit Malviya shared a clip to support the allegation that the violence was started by the TMC. He captioned the clip as, “Another video which shows TMC had strategically planted thugs to create riot like situation during BJP President’s road show.” 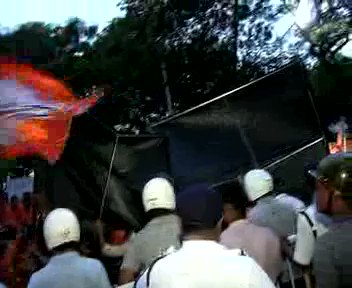 Another video which shows TMC had strategically planted thugs to create riot like situation during BJP President’s road show. The question is why? What was the motivation? Is TMC whipping up sentiment to save its political turf? TMC is a shame on Bengal. #SaveBengalSaveDemocracy

But the video incidentally does nothing to espouse Malviya’s claims.

The clip shows the police trying to keep out BJP supporters who can be seen pushing the barricades. The people on the other side, claimed to be TMC workers by Malviya, are merely raising slogans and waving black flags. In fact, one of them holds up a bottle to the camera to show that it was thrown by BJP workers.

The Facebook post also claimed that TMCP members set ablaze motorcycles. But video footage from the ground shows men in saffron t-shirts setting the bikes on fire. This takes place outside the campus, as evident from the clip.

Another video shot from an elevated position shows the moment when the arson takes place. This footage gives a panoramic view of the site of violence. The bikes are burnt right outside the college gate that is surrounded by BJP supporters. They can be seen sporting saffron t-shirts and waving the party flag.

CLAIM 3: BJP workers could not have entered the campus because it was locked

This claim was also made by Amit Shah during his press conference. Holding up a photograph of the glass enclosure where the statue was kept, he said, “This was inside two locked rooms. It wasn’t publically displayed. My only question is that the incident happened at 7:30 when the college was shut and all the gates were locked. Who opened the rooms? Who had the keys? Who has an administrative hold over the college? It’s TMC…Bengal’s citizens’ should also know who gave the keys when the statue was inside a room? The lock was also not broken…How can BJP workers have the key when they were on the road? All evidence points that Vidyasagar’s statue was vandalised by TMC goons.” 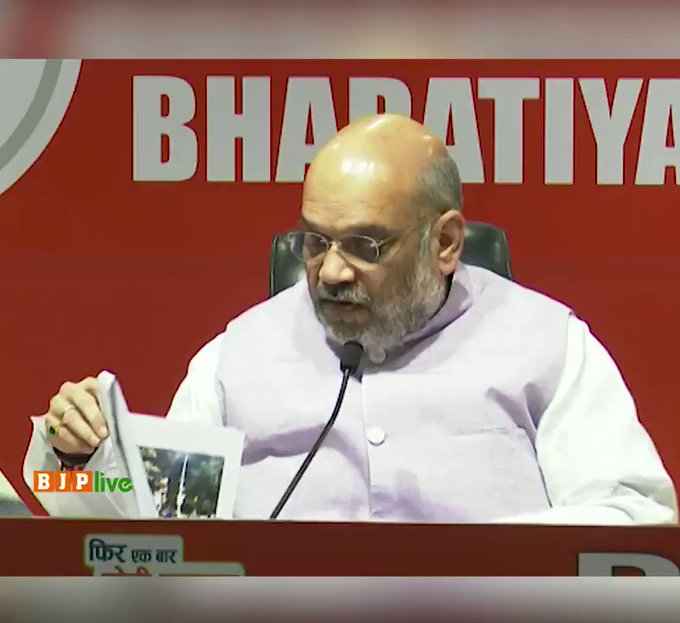 Multiple videos available online show BJP supporters using force to get inside the college campus. At 0:19 minutes in the clip posted below, men adorning ‘NaMo Again’ t-shirts can be seen attempting to break the lock on the gate using sticks, striking the lock repeatedly.

In another video, BJP supporters can be seen entering the campus after forcefully breaking the lock.

An aerial view of the violence showcases dozens of BJP workers/supporters gathered in front of the college gate. Many of them are attacking the locked gate and subsequently entering the campus. At about 50 seconds, the man recording the video can be heard saying in Bengali, “They are entering and breaking things.”

Amit Shah’s rationale that his party workers couldn’t have gotten access to the campus because they didn’t have ‘keys’ is not supported by video evidence that shows them striking the lock repeatedly and entering the campus.

CLAIM 4: BJP workers could not have vandalised Vidyasagar’s statue as it is located deep inside the campus, guarded by an iron gate and a wooden door

Alt News spoke to alumni of Vidyasagar college who said that the institution has multiple statues of Vidyasagar. The one vandalised in the violence was located close to the main building’s gate.

It is true that one has to pass an iron gate, which is the main gate, and a wooden door to get to the statue. However, there is barely any distance between the access points. The image below shows the frontal view of the area where the violence took place. As evident, the main gate is iron, behind which are multiple wooden doors.

We have already shown while fact-checking ‘Claim 4’ that BJP workers entered the premises by repeatedly thrashing the gate and thus, breaking the lock. The party’s chief and the viral social media post tried to build a narrative around the iron gate, attempting to propagate that it is indestructible. A gate, iron or wooden, is as strong as its lock. The misleading emphasis on the durability of the ‘iron gate’ is aimed at misleading people.

Amit Shah alleged in his press conference that BJP workers could not have desecrated the statue as it was inside a locked room. The video posted below shows moments after the college gate was breached. Several individuals can be seen charging at wooden doors behind the iron gate. A few persons who have successfully opened the doors, enter the room and bring with them what looks like parts of a white coloured sculpture. At 0:13, we can see a white object, seemingly made of plaster of Paris, being brought out and thrown around. At 0:21, the same white object is hurled to the ground. From 0:28-0:41, the object remains untouched. At 0:42, a person picks it up and thrashes it again. At least two men in the video can be seen wearing BJP’s colours.

We also located a clip that covers the entire set of events. Posted below, the video first shows saffron-clad men charging at the main iron gate and going past it at 00:32. At about 3:00 minutes into the video, the person recording the footage can be heard saying, “They’ve broken the door and entered inside”, while referring to the wooden door of the building inside. At 4:00, the mob can be seen bringing out Vidyasagar’s bust and thrashing it on the ground. From 7:33 onward, motorcycles are set ablaze.

Photographs published by The Telegraph show ruins of Vidyasagar’s bust, which was kept inside a glass enclosure – the same enclosure that was broadcast by Amit Shah during his press conference. 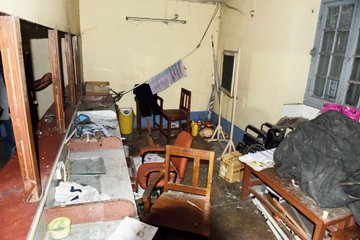 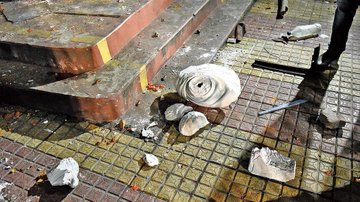 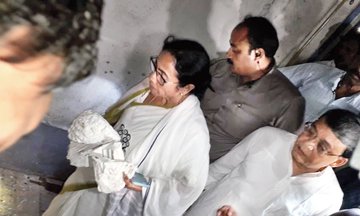 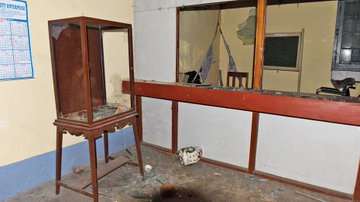 BJP supporters tailing Amit Shah’s vehicle broke into & ransacked the offices of Vidyasagar College, destroying a bust of Ishwarchandra Vidyasagar. Some women students alleged that the intruders tugged at their dupattas and even tried to touch them.

According to The Telegraph, “Principal Goutam Kundu, who said he was shocked while speaking minutes after the attack between 6.50pm and 7.05pm on Tuesday, described how a group broke open the gate and stormed the office and went for the glass case.”

A video posted by Amit Malviya shows moments after Vidyasagar’s bust was vandalised when CM Mamata Banerjee inspects the site. The clip depicts the same location where the statue was being destroyed. It’s noteworthy that the second part of Malviya’s tweet – “the broken statue was neatly placed for Mamata Banerjee” – is misleading because we have already substantiated from earlier videos that though the statue was placed inside a glass enclosure, the enclosure was broken and the statue was hurled right outside the wooden doors. 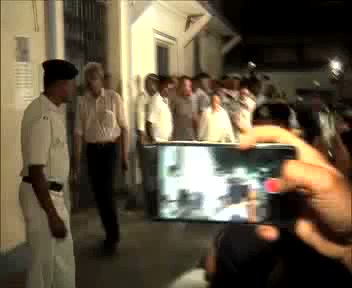 #Vidyasagar’s bust was kept in a glass chamber inside a room (as reported by Telegraph) in the college campus but Mamata Banerjee inspected the broken statue, which was neatly placed for her and media outside. Question is why did she not go to the site? #SaveBengalSaveDemocracy

As per multiple video footages, the ones charging at the locked gates wore saffron t-shirts and the ones forcefully entering the campus were also similarly dressed. That the TMCP vandalised Vidyasagar’ statue is a claim not backed by any visual evidence.

In conclusion, Amit Shah’s allegations and the claims raised in the viral social media post, that were shared by Amit Malviya and Swapan Dasgupta, are not supported by visuals from the ground.

[UPDATE: A video showcasing all the events – saffron-clad men breaking open the iron gate, entering the room with the wooden door, bringing out Vidyasagar’s bust, thrashing it on the ground and setting motorcycles on fire – has been included under ‘CLAIM 4’.]