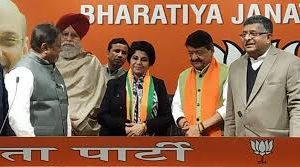 Former IPS officer Bharati Ghosh – who joined the Bharatiya Janata Party (BJP) last month – has “returned” the medal that she had been awarded by chief minister Mamata Banerjee in 2014.

Ghosh, who was police chief of the West Midnapore district for over six years, has already resigned from service. She was once considered close to chief minister Mamata Banerjee. In 2014, she was awarded the CM’s medal for commendable service.

Ghosh has said in close circles that she had sent the medal to the state administrative headquarters, Nabanna, through speed post.

Though Ghosh was close to Mamata Banerjee for several years, their relations subsequently turned sour.

Following her resignation, an arrest warrant had been issued against her in connection with an extortion case. The state police was investigating charges against her and had conducted raids in some of her and her husband’s properties.

It was due to her closeness with the CM that she was transferred out of the Jangalmahal area ahead of the 2014 Lok Sabha elections and even after the 2014 Assembly polls with the Opposition political parties complaining about her before the Election Commission. After the polls were over, she was reinstated.