History comes alive in this tiny Kolkata museum: it preserves the life and times of Bengal’s first family of zamindars The story goes that Babu Abhoya Kumar Roy Choudhury – one of the descendants of the Sabarna Roy Choudhury family, the first family of zamindars in Bengal – once got off his speeding mare at the sight of a British officer manhandling his Indian servant, to knock him off with a tight and steady smack on his face. Later, it is said, the same officer went on to become the magistrate in Kolkata and his friend.

The Sabarna Roy Choudhurys (previously Gangapadhyays before the Roy Choudhury title was conferred on their 22th descendant), the first family of zamindars in Bengal have always been known for their high sense of justice and munificence.

And that is perhaps why Zamindar Lakshimakanta Gangopadhyay came all the way from Halisahar (in the northern fringes of Kolkata), and built the first pucca road to Barisha and introduced there the first Saparivara Durga Puja (the oldest Puja of Kolkata) in the autumn of 1610. He wanted to bring festivity and joy to his subjects – irrespective of their caste and creed – and to create a more consolidated Jaigir.

The photograph of Abhoya Kumar Roy Choudhury’s (1857 to 1937) bespectacled solemn face expresses the same streak of rectitude as this great grandfather of his. It lies in a tiny museum of family artefacts maintained by the 35th descendant.

Lakhsmikanta Gangapadhyay, the 22nd descendant of the Sabarna kula (family) set up his zamindari at Barisha in the south-western part of the present city of Kolkata. There are now two rooms devoted to the family legacy and that could be done due to a fight put up by his great great grandson, Devarshi Roy Choudhury. The remaining seven houses have been razed down with modern multi-storied apartments in their place.

Soon after he was granted Jaigirdari of eight large parganas in and around Dihi Kalkatah by Man Singha as gurudakshina in 1608, Lakhsmikanta was conferred the titles of “Ray” and “Choudhury”.  And from there starts the history of the Ray Choudhury family at Barisha, of the famous and oldest Durga puja and Rathyatra of Barisha and of the nine houses each having expanded into a para, taking after the name of the mansion surrounding which it had grown.

One of the wings of the grand palatial mansion that the boro bari used to be, with its own inner courtyard for family weddings or poita ceremonies and the largest and the first of its kind Durga Mandir in the whole of Kolkata does not exist anymore.

The boro bari that presently houses the Sabarna Sangrahashala (a collection of artifacts or museum) is approximately 300 years old. It was built by Roy Krishnadev Majumdar Choudhury in 1710. The 300 year old presence can still be felt when one enters the tiny museum and doesn’t feel the heat of an otherwise sunny August day.

There are treats for history enthusiasts inside – and the photograph collection should find the very first mention. The Ray Choudhury family has produced several legendary figures. Yogindranath Roy Choudhury renamed as Yogin Maharaj was born to Nabin Chandra Roy Choudhury at Dakshineshwar. He was one of the six main disciples of Ramakrishna Paramhansa and one of the pillars of the spiritual movement that led to the formation of the Ramakrishna Mission.

There’s also a faded monochrome picture of the ghat where the famous philanthropist Rani Rashmoni met her husband Rajachandra for the very first time. There is a collection of pictures of temple architecture taken by one of the members of the Sabarna family about a century ago as photography as an intellectual pursuit was being explored by Kolkata’s patricians.

There’s also Dulal Chandra Roy Chaudhuri and his little black balance and weights almost resembling fancy toy pieces that he would use for making small pills with immediate medicinal use, popularly referred to as puriya in Bengali. The table on which his wares are finely decorated is the other reason for the mention he deserves. It is nearly a 400 year old folding one that was used by John, grandfather of the famous folk poet of Portuguese origin, Hensman Anthony, popularly known as Anthony Firingi. 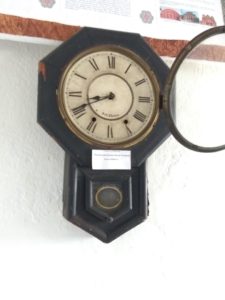 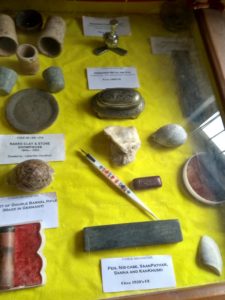 There are also rows of items of everyday use of the zamindar era. Cooking wares capable of preparing meals for 100-200 at a go, peelers, ladles, grinding stones, a traditional small legged tool (the piri) that would be used for family weddings, finely designed wrist-watches, pipes imported from Europe, a beautiful white long nipped pen, tweezers, coins that were in use, a  Seth Thomas pendulum clock whose hands still turn on a winding, a giant grain pot that can hold 240 kilograms of  grain, terracotta showpieces for decorating a living room, an 18th century metal candle stand, a small piece of the first Rath pulled with a face of Jagannath etched on it, a tanpura and shawl used by singer Satya Choudhury, a mini representation of the Aatchala Durga idol, a metal lantern with a missing part quintessentially representative of the lamp designs of its time and several other artefacts fill the small two roomed museum on the ground floor of the house. 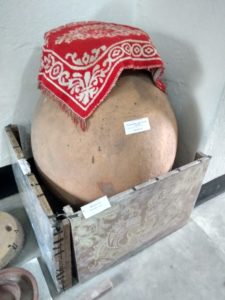 At a time when north Kolkata’s zamindars were relentlessly aping the colonial style living and originating a style of furnishing their homes and lives in a fashion combining native and British nuances, the Roy Choudhurys were catering to the needs of their subjects and living a simple life devoted to spirituality.

The women hardly wore heavy jewellery, there weren’t glass and crystal chandeliers adorning the ceilings of their living rooms. The wealth accumulated out of the zamndari would be spent by the Roy Choudhuris to building a few dozen temples across Bengal. Treating all their subjects equally was a matter of great importance. Fruits sold by Muslim vendors would be used for the rituals during Rathyatra. It was also one of the reasons why eight grand Durga pujas were held in the Barisha area alone, with the majestic thakurdalan of the boro-bari standing testimony to the erstwhile grandeur.

Sadly however, most of that heritage has been lost to the travails of time and due to human negligence. The thakurdalan lies in ruins with a neighbourhood club occupying it to set up its gymnasium. The museum is the only part that keeps the history alive to the present generation, but it is also a reminder of the need to preserve Bengal’s dying architectural heritage and history.