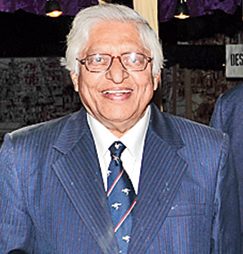 Indian football legend Chuni Goswami passed away on Thursday in Kolkata. He was 82.

He was former captain of the Indian football team and had led the country to win the 1962 Asian Games gold. He has been the most successful captain in Indian football and played 50 international matches as a striker for the country.

The Indian national football team won gold in 1962 Asian Games and silver in 1964 Asia Cup under his captaincy. He played only for Mohun Bagan throughout his entire career despite offers from numerous other clubs.

Chuni Goswami was awarded the Arjuna Award in 1963 and Padmasree in 1983 by the Government of India.

He was suffering from various age-related ailments and had been admitted to a private hospital at Jodhpur Park in Kolkata, where he passed away on Thursday.