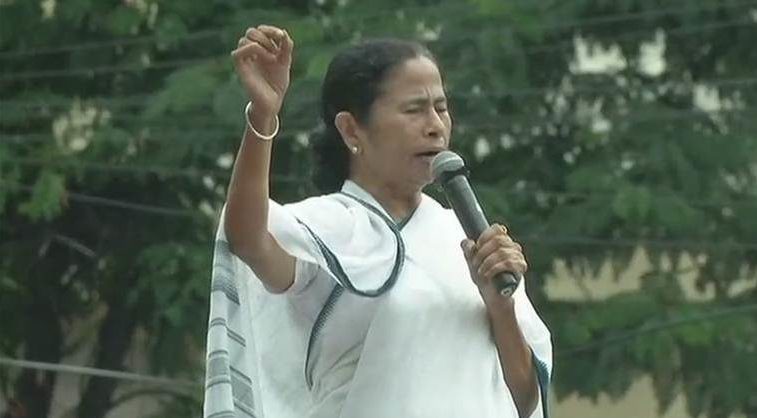 Trinamool Congress chief Mamata Banerjee on Tuesday questioned the fund sources of the Bharatiya Janata Party (BJP) and Rashtriya Swayamsevak Sangh (RSS) asking why there should not be screening on their sources of funds coming from foreign countries.

At a public meeting on Kolkata’s Mayo Road, the chief minister of West Bengal, while addressing her party’s youth wing, Trinamool Congress Chhatra Parishad, said the BJP would use these foreign funds (the sources of which she alleged wasn’t clear) and purchase every vote for Rs 10,000 for a few days but won’t take care of these people for the rest of the year. “I want an answer as to why their sources of foreign funds won’t be screened,” she thundered.

She said that there was no clear answer from the ruling party as to how much funds had been collected from demonetisation and “some organisations” were running on these funds. Calling the present situation worse than the Emergency (in India between 1975 and 1977 under Prime Minister Indira Gandhi’s rule), Mamata Banerjee said that the organisation that had presence in 36 countries and was running in the name of a “Hindu” organisation, was interfering in people’s religious beliefs and food habits.

During Tuesday’s speech on Mayo Road, Mamata Banerjee did not seem to be making much of a difference between the BJP and the RSS, as her attack – on their functioning, principles and source of funds – was directed at both in the same way.

She said that there have been many governments at the Centre since Independence – and not all of them to her liking either – but none have destroyed major institutions in the country the way the present government was doing. She alleged that the BJP had such influence on the national media that journalists who chose to do stories against the government and against the ruling party at the Centre ended up losing their jobs.

Earlier this month, BJP national president Amit Shah had addressed a party meeting from the same place in Kolkata’s Mayo Road. And as if to answer the questions he had raised, Mamata Banerjee today went for an all-out attack against the BJP, Shah, Narendra Modi and the RSS.

“They are saying the NRC [National Register of Citizens] will be done here (in West Bengal) too after Assam. Let them try!” Banerjee threw a challenge at the ruling BJP. “Amra shob bagher bachcha ekhaney boshey achhi. Haath diye dekhuk (We are born of a tiger, let them try to do us any harm)”, she said. It must be mentioned here that the West Bengal BJP has made a demand for NRC in this state already and some BJP national leaders too have made the same demand.

Can he (it was not clear whether her attack was directed at Narendra Modi or Amit Shah at this point) show his own birth certificate and say on which date his mother and grandmother was born?

Banerjee was quite clear about who she thought were the BJP supporters in West Bengal now. “Yesterday’s CPI-M harmads are today’s BJP jallad,” she said. The term harmad has been widely used in the vernacular media to refer to the goons working for the CPI-M when the Left Front ruled West Bengal till 2011. And jallad means hangman – killers in other words.

She asked the young women and men at the gathering to be cautious about fake news – for which she said the BJP was pumping in huge amount of money. “They are showing Bangladesh as Bengal, scenes from Hindi films as situations in Bengal on social media. Be careful about what you come across on Twitter and Facebook,” she said. “They might have money, but we have brains. For anything objectionable you come across, answer back,” she instructed the young generation to act on the social media and to hit back at fake news mongers.

Banerjee was also critical of the way the Central government agencies were functioning and the way the BJP was using the agencies unfairly. “Now they have adopted a strategy of disturbing the police,” she said. “We understand everything.” She was perhaps referring to the recent letter from the Central Bureau of Investigation (CBI) wanting to record statements of four IPS officers (one of them retired) in the state who were initially investigating the Saradha chit fund scam. Banerjee said, “Saradha hadn’t started from 2011 (the year Trinamool Congress came to power in West Bengal). Why shouldn’t the investigation start from the 1980s?” she asked.

Her logic was clear – the BJP was putting pressure on her and her government in every possible way. And not just her, she said this applied to all leaders in all states who were against the BJP. “They are saying go, disturb the Trinamool Congress, Congress, disturb Kumaraswamy, Mayawati, Akhilesh, Stalin, and they are using the agencies to do this,” she said.

Banerjee finished with a stern warning – “those who are acting thus, do not know that the BJP won’t be in power tomorrow. We are prepared to fight.” She reiterated the slogan she had raised earlier, that “du hajar unish (2019) BJP finish”.