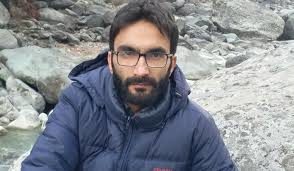 Chunduna (Ganderbal): Chunduna, a sleepy hamlet in the Ganderbal district of Jammu & Kashmir has turned into a “revered shrine” in the past one week, courtesy a “cherished son of the soil” killed in a gunfight with government forces on May 6 in south Kashmir’s Badigam village of Shopian district.

Mohammad Raafi Bhat had an approximately 40-hour rendezvous with the gun, before his epitaph was raised in one of the myriad graveyards that have mushroomed from the 1990s, ever since insurgency struck in the region.

Thirty-two year old Bhat, an assistant professor in Kashmir University’s sociology department, had a doctorate degree and junior research fellowship to his credit. He had also cracked National Eligibility Test (NET) and the State Eligibility Test (SET). Which meant a good and prospective life ahead. But he chose a different path, like many young boys in Kashmir do these days, leaving lucrative careers and riches behind and walking toward the forests to fight for “Azadi”.

Bhat was killed along with four other militants, including top militant commander Saddam Padder, a close aide of Burhan Wani.

A dozen odd shoes lying at the entrance of Bhat’s home indicated that mourners continue to visit the family. A lanky boy leads me to a dimly lit room, where a group of elderly men are chatting in a hushed tone. One of them, a burly man in a white beard and sturdy hands identifies himself as Abdul Rahim, father of Bhat. The pain of losing his son is writ large upon his face. Rahim is withdrawn, he is lost in a soliloquy that only he can hear, as if he is cut off from the world around himself. Slowly, he takes out his mobile phone and calls someone. After five minutes, a middle-aged man arrives in the room. He is Bhat’s brother, Imtiyaz Ahmad.

Imtiyaz is visibly angry. He doesn’t want to be interviewed. “I have lost my brother. That is all,” Imtiyaz says. After lot of persuasion, he talks.

“They played a cruel joke on us. They played with our emotions. We were called to persuade Dr saeb (his doctorate brother Raafi), but then they had ended it all before we could reach him,” says Imtiyaz referring to the horrific events of May 6 when police had called the family to ask Raafi to surrender.

On Sunday, May 6, Bhat had received an early morning call. The voice from the other end was of a person they were longing to hear for two days. It was their Raafi, who had been missing for 48 hours after he had gone mysteriously missing from the KU campus, where he used to teach, in order to become a militant. Nobody had a whiff of this — not even his family, friends or his students.

Raafi, on the other end of the phone call, broke the news to his father that he had joined the militants – an information that was enough to make the family edgy and unsettled. “Forgive me if I ever harmed you,” Rahim recalls his son’s last words to him.

The day before, the family had lodged a missing report at Nigeen police station through Kashmir University officials, after failing to locate Raafi. “We called his friends and acquaintances. We searched for him in hospitals apprehending he might have met with an accident,” says Imtiyaz gesturing to his father to control his emotions.

Imtiyaz adds though, that they cannot be sure Rafi would have surrendered if the family was allowed to reach him one last time and if the encounter had been delayed for some time. Imtiyaz simply consoles himself saying it was “destined” for his brother. “It was at around 8:30 in the morning that we received a call from SSP Ganderbal asking us to reach Shopian to ask Raafi to surrender,” says Imtiyaz.

From November last year, official records show 11 boys have shunned the gun and returned to their homes. This, a counterinsurgency officer says, has been possible only through family support.

The Bhat family last Sunday had left home on a 70- kilometre journey from their village to Shopian, ‘in search of hope’. “My father, mother and sister were all there in a car when we came to know that he had been killed. We had barely reached Srinagar when we were ripped apart by this news,” says Imtiyaz.

The “traumatised” family could reach Shopian at around 11:30 in the morning. “We were stopped seven kilometres ahead of the encounter site at Zainapora by the forces and taken to the area’s police station, where we were shown his dead body at 1pm,” says an upset Imtiyaz.

What has also left them aghast is that they were “forced to remain with the dead body at Zainapora police station for more than three hours”. “It was traumatic to remain with his lifeless body — my father, mother and sister were all wailing and there was no one to console us,” says Imtiyaz.

The Bhat family was eventually allowed to return home with Mohammad Raafi Bhat’s lifeless body along with police escort. “We were not even allowed to mourn freely,” says Imtiyaz, now leaving the room.

[When I talked to Inspector General of Police, Kashmir, SP Pani, he said that in encounter situations things are not entirely under the control of security forces. “We tried to involve his (Raafi’s) family and even our SP tried to speak to the militants. But then there was firing from their side,” he said, adding “nobody wants casualties”.]

Everyone in the room falls silent and mournful. Before I leave, I enquire about Bhat’s wife. An elderly person tells me her name – Iqra. “She left for her parents’ home in Srinagar yesterday. She is distraught and not in a condition to talk,” he says.

The entire Chunduna village is still shocked by Raafi’s death and perturbed about his joining the militant ranks.

A villager from Chunduna says they have been known as “Gaddar gaam” (a local term used for those not participating in anti-India protests). All of a sudden with one militant from the village, they now they find presence in the valley’s militancy map. “Even during 2016, no one from the village was injured since no protests occurred here. Such feelings don’t prevail in this village,” says Farooq Ahmad War, a neighbour.

When many in the valley complain that suppression from the forces often drive them towards taking up guns, Raafi had never shown any inclination towards guns, except once in 2000, says War. At that time he was a school boy. “It was childish on his part. He had gone away saying he would join the militants. His parents got him back. You know how silly kids can be,” War explains.

Official records paint a grim picture of the valley’s current scenario. In the first four months of this year alone, 45 youths have joined militancy. Over a hundred people have been killed in militancy related operations including 53 militants, 33 civilians, 14 policemen, 13 army men and one political activist.

“Nobody knows why he suddenly left and chose to take up the gun,” says Javaid Ahmad Shah, Raafi’s childhood friend.

Shah says his friend Raafi was among the first doctorates in the entire village. “He was a good human being. He would spend all his salary and scholarship money on people in need of money. Many people in this village will tell you how he would offer them financial help,” Shah tells me near Raafi’s grave covered with a green flag and flowers.

Shah tells me he is not financially well off and earns a meagre sum working all day at crewing buses at the village bus stop. “He used to help me. Last Friday, he gifted me a pair of new shoes. He had a certain intuition – even though I never told him if I needed something, he would always get to know,” says Shah, wiping tears, sitting by the side of his friend’s grave.

Around this time, a skinny boy with thin beard watches us from a distance. He identifies himself as Rafiq.

Rafiq says he had a “strong bond” with Raafi. “He was a teacher par excellence – a quiet but highly intelligent man. A week before he died, he asked me about my plans to do my Master’s degree,” he said, adding that he had lost a mentor.

“Since 2008, we have seen the transition from guns to peaceful protests. It was a choice of the people.  But then the state has been equally brutal and tried to crush this peaceful dissidence,” says Geelani.

He says: “shrinkage of political space for even expressing legitimate political views is also deemed as militant and isn’t allowed”.

“It is now Kashmir’s fourth generation which is educated and conscious. So, in Kashmir even militancy is politics. These youths are not battle hardened. It is an expression of making a political statement,” says Geelani.

Geelani adds that militancy is Kashmir is being “overplayed”. “In a population of over 70 lakh, a mere figure of 200 militants is not alarming. It is a propaganda of some agencies to portray Kashmir’s present political struggle as radicalisation, he says.

With the Centre announcing Ramadan ceasefire, there are hopes that blood won’t be spilled and coffins won’t be carried on shoulders for at least a month, but analysts believe “Kashmir is a cancer that needs a permanent cure, not a temporary relief”.

It was time to go. It would be night, and perhaps, soon, the morning rays of the following day would be able to remove the darkness altogether.