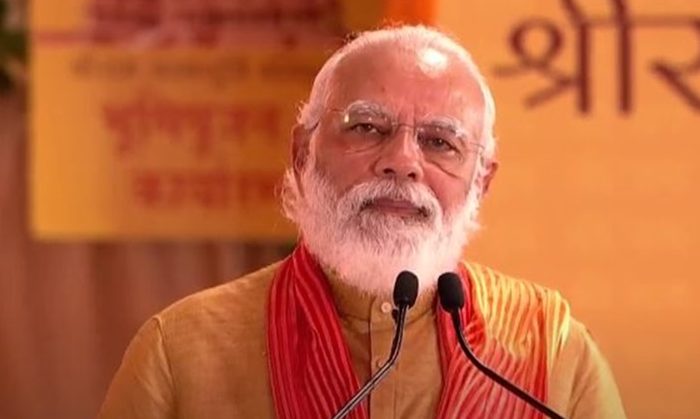 Prime Minister Narendra Modi on Wednesday laid the foundation for the setting up of a Ram Temple in Ayodhya and participated in a Bhumi Poojan ceremony. Modi travelled from Delhi to Ayodhya and took part in the ceremony – this being his first visit to Ayodhya in 29 years. In 1992, he had vowed to return there only if the Ram Mandir was built.

On Wednesday, he laid a silver brick to symbolically represent the laying of the foundation of the temple. The three-storied temple has been designed in the “Nagara style”, which several domes and pillars. It will be 161 feet tall.

The temple town of Ayodhya has been decked up in every nook and corner to mark the historic event. PM Modi first offered prayers at the Hanumangarhi temple and from there went to the Ramjanmabhumi, which is considered by many to be the birthplace of Lord Ram. Modi went to Ramjanmabhumi, the shrine of the Ram Lalla and then from there went to the Bhumi Poojan ceremony.

Uttar Pradesh chief minister Yogi Adityanath and RSS chief Mohan Bhagwat were among the others present at the ceremony, apart from around 175 spiritual leaders and priests. Veteran BJP leader Uma Bharti was present at the ceremony. Union Home Minister Amit Shah could not attend the ceremony as he was admitted to a private hospital in Gurugram after testing positive for COVID-19. BJP veterans LK Advani (who had led the movement for Ram Mandir in the 1990s) and Murli Manohar Joshi, watched the ceremony through videoconference as a precaution for COVID-19.

The building of the Ram Mandir has been one of the most important campaigns of the Bharatiya Janata Party (BJP) since the 1990s. The BJP’s phenomenal rise in the country has been rooted in its goal of setting up the Ram Mandir and has been a constant part of its poll campaigns.

The temple will be built after decades of dispute over a 2.77 acre plot where the Babri Masjid stood before it was razed in 1992 by Hindu activists who claimed it was built on the ruins of a temple which was where Lord Ram was born. Nearly 2,000 people died in the riots that followed. In November 2019, the Supreme Court of India said that the site will be handed over for the building of a temple, and an alternative plot will be given to the Muslims in its place.