Gujarat will vote in state polls by the end of 2022 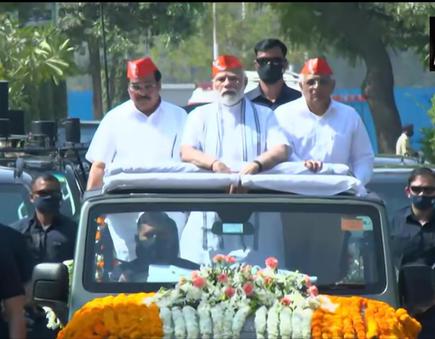 A day after the big win for the Bharatiya Janata Party in four out of five state elections, Prime Minister Narendra Modi held a roadshow in Gujarat, which will vote in state elections by the end of 2022.

PM Modi reached poll-bound Gujarat — his home state — to be welcomed by a huge gathering. Dates for Gujarat elections have not been announced yet, but a two-day programme by the PM already appears to have set the mood for elections. He rode on an open jeep and waved to supporters along the road as the roadshow began from the airport and headed towards the BJP state office in Gandhinagar.

He will address the Gujarat Panchayat Mahasammelan on Friday evening, which is to be attended by one lakh representatives from panchayat institutions. “Leaving for Gujarat, where I will be attending various programmes today and tomorrow. At 4 PM today, will address a Panchayat Mahasammelan, where several representatives from Panchayat Raj institutions will attend,” the PM tweeted. During his two-day visit, PM Modi will address the first convocation address of the Rashtriya Raksha University as chief guest. He will also inaugurate the 11th Khel Mahakumbh and deliver an address.