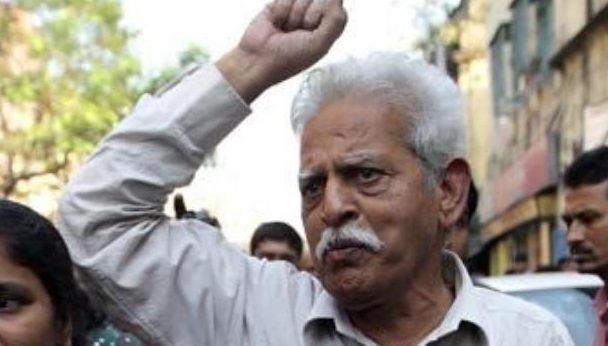 Poet and activist Varavara Rao, who was shifted to the state-run JJ Hospital from Taloja Central Jail in Navi Mumbai, has tested positive for COVID-19. Reports quoted Dr Ranjit Mankeshwar, dean of JJ Hospital stating that Rao (81) has not shown symptoms of COVID-19 so far and is stable, and would be shifted to a COVID hospital soon.

A family member said that this is “criminal negligence” by the state. The family members have been repeatedly appealing to the state to release him from jail considering the COVID-19 situation and that his age and health conditions make him all the more vulnerable for contracting it.

Last week, Rao’s wife P Hemalatha and daughters P Sahaja, P Anala and P Pavana appealed to the government and demanded his immediate hospitalisation, following conversations with him over phone and on realising that he was in a confused state and was hallucinating. This was confirmed to them by a co-accused companion, who said that Rao was unable to even walk properly.

The jail authorities admitted him to the state-run JJ Hospital, after repeated pleas by family members.

Maoist ideologue and poet Varavara Rao was arrested by the Pune police in November 2018 from his Hyderabad flat for an alleged role in the Elgar Parishad-Bhima Koregaon case of Maharashtra. His bail pleas have been rejected at least five times. Rao was moved to Taloja jail in the outskirts of Mumbai from Pune’s Yerwada prisons earlier this year just before the outbreak of COVID-19 across the country. Since then, his family members have been worried about his health conditions inside the jail as many prisoners tested positive for COVID-19.