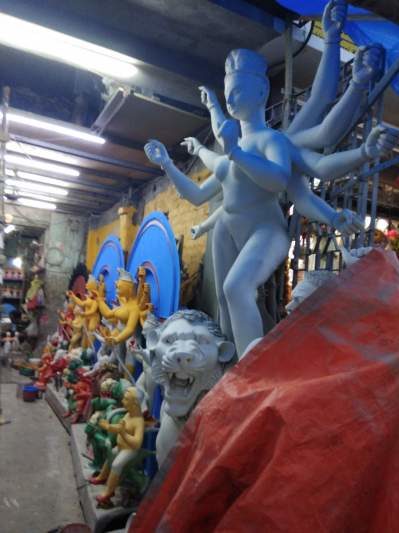 It was a rain-drenched afternoon at Kumartuli, the idol-making hub in north Kolkata that is known to draw people from far and near. As Durga Puja approaches, Kumartuli – that has a long tradition of clay idol making – becomes one of the greatest attractions in the city.

I hate to admit this, but I had never visited Kumartuli before. No doubt, I had a strange, mixed feeling. I didn’t know what to expect. Would it take my breath away? Would I be disappointed?

For one, I didn’t think it would be located in such a narrow alley. Durga Puja – as we Bengalis see it – is always a grand affair, whether it is a shoestring budget para celebration (its number is ever decreasing due to the onslaught of corporate-funded big-budget pujas), or one of the top draws in the city with uncouth, astronomical budget. Durga Puja is always a grand celebration with five days of fun, new clothes, spending more than what one does usually, and more of everything. Therefore, a tiny, dingy lane as if it were hidden away from people’s eyes – and where artisans work in pitiable conditions – was a bit jarring for me. An elderly man showed me the direction and I followed.

What lay before my eyes was a beautiful rain soaked view of Kolkata – houses standing cheek-by-jowl, a place that reflected how the city has evolved over decades, and scores of artists at work dedicated to the long tradition of idol making.

I was excited. I was finally there!

I walked on, sploshing through the mud and water. Lining the alley on both sides were potters’ studios or workshops – some with tin roofs while others had clay tiles. Some were concrete houses – but nearly all of them had huge plastic sheets hanging on both sides to prevent the rains from damaging the work.

Standing along the banks of river Hooghly, Kumartuli’s tiny workspaces – workshops or studios – are also used for storage, cooking, eating and sleeping. This is where they spend a large part of the year working. As Durga Puja draws near, the work hours become more and more erratic and towards the end it is about catching just a few hours of sleep. I stopped at a studio as I heard two women talking to the potters. They were discussing how to wrap a saree around the idol they had ordered. The potter said that the saree was creating a bit of a problem as it was more than the usual aat haath (an approximate measurement of the saree taken with an arm and translates roughly to eight hands). He asked whether it could be stuck to the idol instead of wrapping it around her body, to which both women disagreed vehemently.

They inquired if China-di was around, as they seemed confident she could pull it off easily. The name rang a bell and I knew it was the studio of the famous China Pal, the renowned woman potter of Kumartuli, about whom I had heard so much.

The potter again got back to his work – smoothening the clay on the idol. It was an exquisite piece of work, the idol was non-traditional in form, and had perhaps been ordered by one of the bigwigs. Curious, I asked him the price. Smiling, he replied, “We can’t tell you that”.

I moved ahead, to watch other artisans at the work in their studios. Despite very little time left for the Pujas, the potters still seemed confident they could wrap up the remaining work on time. There were no signs of stress on anyone’s face. It was frantic activity for sure, but not something that was palpable. They all seemed so calm!

In every studio, painting on the idols was on in full swing. I could see that many of the studios have taken up modern sprayers to speed up the work, but many still relied on hands.

In some studios – like that of the famed Mohon Banshi Rudra Pal – most of the idols were ready to start the journey to pandals. Many had perhaps left the studios even earlier.

I could see that many like me, were taking photographs of idols and idol-making, moving from one studio to another. Some had come to place orders on behalf of puja associations. Many journalists, photojournalists were hanging around looking for stories.

I found a group of young people asking a little girl in one of the studios to pose for them with the moulded face of a Durga in her hands. She was shy, but agreed. Another group was shooting in various parts of Kumartuli with a little girl dressed as Durga.

People were stopping by to choose from the scores of idols stacked on both sides of narrow lanes. Not only were there large idols, some miniatures were also being sold.

Kumortuli also houses workstations for those who create accessories.

Decorations made of styrofoam (better known as thermocol), delicate wire and filigree work were also being prepared and bought with great enthusiasm.

As darkness descended, the lights inside the studios were switched on, creating a magical atmosphere in the semi-darkness. Bit by bit, I went on my way back to the main road.

In the magical light, I noticed that the little girl was still posing as Durga.