38 Trinamool MLAs are in touch with BJP: Mithun Chakraborty

21 are in direct touch with me, Chakraborty claimed today. 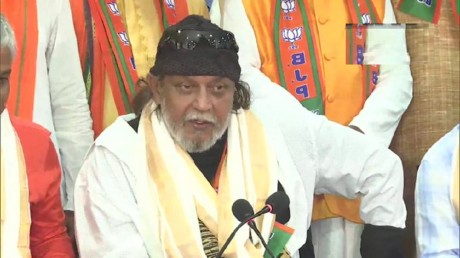 Actor Mithun Chakraborty, who joined the Bharatiya Janata Party ahead of the 2021 Assembly elections in West Bengal, on Tuesday said that 38 Trinamool Congress MLAs are in touch with his party. “Of them, 21 are in direct touch with me,” Chakraborty claimed today, at a press conference in Kolkata at the BJP’s Hastings office.

Leader of Opposition Suvendu Adhikari however, did not confirm this. He said: “I cannot say this. He has said it, it is his responsibility.”

About the BJP-Shiv Sena divide in Maharashtra and the formation of a new government by Eknath Shinde, Mithun Chakraborty said: “In Mumbai, one morning I saw that the BJP-Shiv Sena had formed the government. Can’t it be the same here as well?” Asked if the BJP would try to form the state government in West Bengal in the lines of Maharashtra, Chakraborty said: “First a film’s music is released. Then comes the trailer and finally the film gets released. The music release was scheduled today.”

The former Trinamool Congress Rajya Sabha MP – who was with Mamata Banerjee’s party from 2014 to 2016, said that if there is evidence, no one can get away in the SSC scam. The Trinamool Congress did not want to attach importance to Chakraborty’s claims however. Party spokesperson Kunal Ghosh said: “He wears strange clothes and speaks about strange things. Whatever he had said prior to the last Assembly elections, we have seen its outcome.”