My great-grandfather stood bare-backed and black against the grey of the dock. He was in a line of Indian men walking toward the outline of sails. It was 1860. In a few minutes, they would board the SS Belvedere. Begin to know the rough grain of the wood on their skin as the ship rocked. Twenty people would die of cholera on that ship before it docked in Natal. But he would survive. A pen sketch of the ship is framed in our upstairs room, a sign for my grandmother of promises made and kept.

There were many Indians, like my great-grandfather, who were lured across the sea to work in sugarcane fields. Now my dad bought large bags of sugar to sell in his store.

So yes, I was a descendant of desperate people who had come here looking for a better life. I didn’t usually think like this. Most of the time, I was thinking of bones and blood and incisions, school exams and being irritated doing shifts at the store. The way the cash register drawer always seemed to jam. Why didn’t Papa, for god’s sake, get a new one?

But the tsotsi’s visit had changed things. His burgundy vinyl shoes. The sound of them against the floor as he walked away from the counter with our money in his pocket. His laugh. He’d said he was from the Black Berets, but he wore a fedora.

At dinner, Papa didn’t say anything about the tsotsi to my grandmother. But of course, Jyoti kept asking about him, calling him the fancy man. Like he was an old friend of ours who had dropped by to give her a treat. I told her to keep quiet, but that only encouraged her.

Papa helped himself to more food and ate as if he’d completely forgotten the tsotsi.

I got up from dinner, putting a last piece of roti in my mouth.

‘Falling out, it’s falling out.’ Jyoti pointed at the roti.

My grandmother made a disapproving noise.

‘Where are you going?’ Papa asked.

Papa said nothing. The mid-year exams were coming, and Papa knew as well as I did how hard you had to work to get into medical school. The idea that his own daughter might become a doctor gave him something to look forward to.

Study group was the best thing to say when I was going to a SASO meeting, and Krishni and her brother Prinesh were good camouflage. Krishni was also trying to get into medical school. Prinesh, who was older, with his neatly groomed hair that shone with hair oil, liked telling people that he had met special requirements and was already at Wits University. My grandmother liked repeating the same nice things about Prinesh every dinner.

Prinesh told me when the SASO meetings were happening— even though he knew my grandmother and father disapproved. I don’t even know why he went to the meetings. He never really talked about politics.

It was a twenty-minute walk from President Street to Wits. We took Rissik Street, skirting past old, red-brick office buildings with their elaborate hooded entrances and newer buildings that smelled of paint and cement. Every few minutes or so, headlights from cars flared up behind us. Ever since the tsotsi came, I kept thinking that every car, every footstep was him or one of his men. Tossing their cigarettes, picking their nails with knives.

I needed a plan for when he came next.

The campus was quiet when we got there. We stopped at corners of cement-and-brick walls and watched for policemen.

Because of the arrests over the past few weeks, the SASO meeting days changed often. Last week, there were four policemen standing outside the back entrance of Senate House. They hadn’t questioned us. To be neither black nor white was to have different, unclear loyalties. It wasn’t assumed that we were political agitators.

Still, it was worrying that the police had sent four policemen to disrupt what was, for now, still a legal meeting.

We circled from the back of Senate House to its front, passing the long flat steps below the pillared façade.

Prinesh picked seats at the back as a small group of university students collected at a table that held a thermos of coffee. They poured the coffee into plastic cups, not noticing how some of it dripped to the floor and onto their shoes. I scanned for missing faces. Of the usual four people chairing the meeting, one was missing. A smaller man had taken his place. He stood at the table, his eyes darting to different points in the room. He hadn’t taken off his beanie, which looked dusty. I imagined he was the kind of man who didn’t sleep in beds, but in hidden places. A man who wasn’t supposed to be here. Not officially.

Ten minutes later, younger students burst through the door and took seats at the front. On the left side of the front row, two students in blue cardigans sat on either side of a guy in a loose, green-and-yellow printed shirt that went to his knees. He was having a good time, nodding at people he knew, his arms spread over the backs of the chairs next to him. The boys either side of him were silent, strangely alert, as if they were his bodyguards. One of the boys had a pair of sunglasses resting above his forehead. The girl who I’d given my pamphlets to wasn’t here. It was silly to imagine she might be.

I learned later that the boy in the printed shirt was the one who everyone would follow on the day the protests started. His name was Masi Ngumede.

But all I knew then was what I had read in the newspaper the previous week. A judge had sent four students from Morris Isaacson School to jail for planning to blow up the Orlando Power Station with help from trained ANC operatives in Mozambique— the Umkhonto We Sizwe. Some of the SASO members at this meeting must have been working with them. But something had gone wrong.

Like me, Prinesh was staring at the students sitting at the front. He looked scared.

‘What’s the problem?’ I asked. He didn’t reply. A light film of sweat had collected over his narrow cheeks and forehead, his small moustache. The sweat made his face look like a mask.

The man with the beanie at the front stood and saluted the students. Then he slapped the table. ‘The Afrikaans Medium Decree Act.’ He slapped it a few more times. ‘Forcing the language of the oppressors on our brothers and sisters here. Making sure that they will be servants to the Afrikaner. Do we accept this?’

‘We’re leaving. Now,’ Prinesh said, pushing Krishni in front of him and trying to do the same with me. I shrugged him off, but followed. We pushed past the crowded room to the exit, Krishni accidentally tipping over the thermos. I picked it up. Eyes on me, including the boy with the green and yellow shirt, and his friend with the sunglasses. I wasn’t sure they wanted me here. And we went out into the street. I felt the coffee bleed through my clothes. Krishni and Prinesh walked ahead, fast, but I lagged behind, nervous, angry.

And not just because Prinesh had forced us to leave the meeting early.

All I could do was sit in the shop, study, collect pamphlets and pictures of Steve Biko’s determined face, with his large forehead. He’s a doctor, too, I wanted to tell my father. But I never would. Somewhere out there was the book of pamphlets that I’d thrust into a stranger’s hands. All I could do was wait.

Maybe it was better that I had given the girl my pamphlets. After I’d seen the car again, I knew I should never have kept them. If she tried to report me, I could turn the story on her. As my grandmother liked to say, police would always believe an Indian over a black.

The two figures ahead of me were toy-sized pieces in the dark. I ran to catch up. 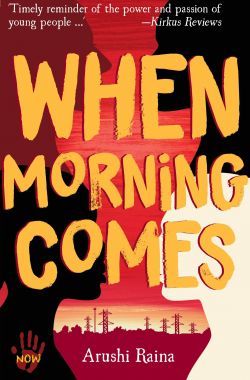 Excerpted with permission from When Morning Comes, Duckbill.

It’s 1976 in South Africa.  In the black township of Soweto, Zanele works as a nightclub singer and is plotting against the apartheid government. Her best friend Thabo, schoolboy turned gang member, has troubles of his own–a deal gone wrong and some powerful enemies.

Across the bridge, in the wealthy white suburbs, Jack plans to spend his last days in Johannesburg burning miles on his beat-up Mustang–until he meets Zanele. Working in her father’s shop, Meena finds a packet of banned pamphlets.

A series of chance meeting sets off a chain of events–a failed plot, a murdered teacher, a forbidden love and a growing student movement that sweeps across the country like a blazing fire.

When Morning Comes is a part of the Duckbill Not Our War series. The NOW series deals with children growing up in times of conflict – powerless, vulnerable, and yet, against all odds, brave and hopeful of a better future.