Abhishek Banerjee’s caustic comments on Subhendu Adhikary: I have not used parachute or lift; it’s downfall for those who do so 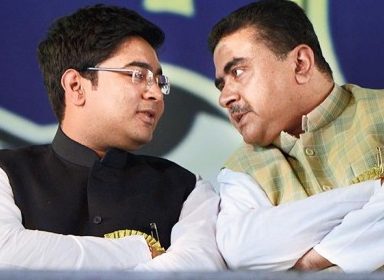 Trinamool Congress’ senior leader Subhendu Adhikary resigned as minister in the Mamata Banerjee cabinet on Friday, sending ripples across Bengal’s political circles. There are talks that he is likely to join the Bharatiya Janata Party (BJP). On Sunday, speaking at a public meeting in his Lok Sabha constituency Diamond Harbour, Trinamool Congress MP Abhishek Banerjee – Mamata Banerjee’s nephew – made a vitriolic attack on Adhikary without mentioning his name.

A few days back, Adhikary had said at a public meeting that he had worked hard to reach where he was today, and had neither used a lift nor a parachute, which could have made things smooth. Some had read between the lines and deduced that his words probably had a reference to Abhishek Banerjee, whom he alleged to have made it easy in politics, being Mamata Banerjee’s nephew.

While Abhishek Banerjee had not retorted back then, his “reply” seems to have come now, after Adhikary resigned as minister. He still remains an MLA though, and a member of the Trinamool Congress, a fact Adhikary has highlighted after his resignation. He has indicated that he would like to first resign as MLA before joining any other political party.

But the party seems nowhere keen on continuing together, and Abhishek Banerjee’s words on Sunday seem to have taken Trinamool Congress’ relationship with Adhikary on a warpath already. Insiders say that Subhendu Adhikary’s main disgruntlement has been the rise of Abhishek Banerjee in the party, and prioritising him instead of other “deserving” senior leaders.

Abhishek Banerjee further said on Sunday: “Had I used the lift or parachute, I could have been given a ticket from South Kolkata (a seat from where Mamata Banerjee has won for several terms), but the party decided I should fight elections from Dum Dum.” He said that the situation was not favourable when he went to seek votes in the constituency, and now he has won a place for himself through hard work in the area. Referring to Subhendu Adhikary’s comments, he said: “Those who use lifts and parachutes perish easily, and that’s inevitable.”

Appealing to people, Banerjee asked whether people would forgive those who had betrayed the “mother”, Mamata Banerjee, who had given birth to the party Trinamool Congress.