Absolute & dangerous untruth: Tapati Guha Thakurta says she is shocked at the misinformation about the cause of husband Hari Sankar Vasudevan’s death 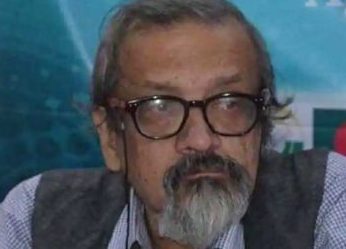 Historian Hari Sankar Vasudevan died in Kolkata on May 10 at a private hospital.

This was posted by my sister Tapati Guha-Thakurta…

I write this post today in a state of acute consternation, in the wake of a crippling personal tragedy in my life. Over this past month, my daughter and I have lived in a bubble of disbelief and denial of losing the most beloved person in our lives, surrounded as we were (and still are) by his presence in every part of our home. I have not had the heart to read any of the news items, tributes and obituaries that have poured out for my husband, Professor Hari Sankar Vasudevan, in the days and weeks after 10 May.

Today, a month after that fateful day, I found myself looking at some of the news reports on Hari’s passing away and found myself truly SHOCKED by a repeating item of false news (I would call it deliberate disinformation) that kept cropping up in these reports… and I could not bear to read this false information anymore.

Each of these news reports have circulated the misinformation – the source of which, it is said, is the AMRI Hospital Salt Lake and the doctors treating him – that Hari had other chronic ailments, when he succumbed to an acute respiratory distress caused by Covid pneumonia on the night of 9th-10th May. This is an absolute and dangerous untruth. Hari (who turned 68 in February this year) HAD NO CHRONIC AILMENTS OR “CO-MORBIDITIES” AS THEY ARE REFERRED TO IN THE CASE OF COVID DEATHS) – he did not suffer from COPD, asthma or any lung disorder, nor any diabetes, hypertension, kidney or heart diseases. This is why it remains a matter of utter shock and horror to his family and friends that an energetic fully-working person like Hari, with no other chronic ailments, could succumb to the virus so rapidly after a week of fever. That this false information was being peddled by AMRI hospital makes it particularly dangerous and reprehensible. It smacks of an insidious move to pass off the cause of his death to co-morbidities by the hospital and government authorities, none of whom I trust beyond my nose. This is not a matter of quibbling detail or mere technicality, which is no point going over, now that the person is gone. It is a matter of utmost importance to each and everyone of us, as the virus closes in on us every single day, and there is zero transparency and clarity of what needs to get gone by those afflicted, rich or poor, ordinary or well-connected. I have not received any proper report about what happened to Hari during his five terrible days in the AMRI Salt Lake Covid unit, where I dropped him off in our own car on the night of 4th May, a still alert, walking and talking person whom I would never see again.

I have nothing left in me at this point to demand a full report and enquiry. But I do believe that given the kind of person Hari was – given the huge respect and affection he had of so many in the city and the world over – the very least he deserves is public knowledge of nothing less than the truth about how and why he met his untimely end in the hospital…

AMRI Hospital authorities meanwhile said that the hospital did not give any press release following Vasudevan’s death and the death certificate did not mention co-morbidity.