Attempts to popularise puppetry, a puppet festival in Kolkata this year 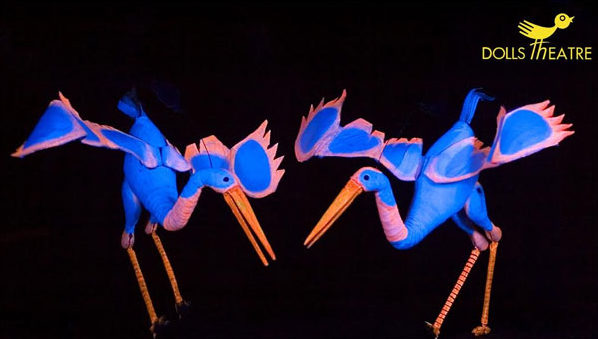 Spirited songs and dance by humans, a sombre tale of a spider and a bird, a tree being chopped off in seconds – only a puppeteer can conjure up these dramatic moments at his fingertips.

Despite puppetry being an ancient art form – said to have originated 4,000 years ago – and a long tradition of puppetry in India, not too many people are keen audiences of these shows. But for the puppeteers, such is the passion that they continue to walk the difficult path in order to preserve the art form.

In Kolkata, Sudip Gupta has been running a group – Dolls Theatre – since 1990, and now he is bringing together other puppet groups from different parts of the country to organise a puppet festival in Kolkata in 2018-end. The enthusiastic puppeteer is also discussing with senior officials of the Central government to look into the possibility of introducing a course on puppetry in India under the guidance of New Delhi’s Sangeet Natak Academi.

“Currently, there’s no scope of learning puppetry in India as a course. It is only in different puppet groups that one can learn. But puppetry is a traditional art form, and must be taken seriously. There’s only a chapter on this art form taught in one of the courses in Rabindra Bharati University. We want a full course on puppetry so that many more people can learn this art form and it will be in good hands to preserve this form of performance,” Gupta said. In Iran’s Tehran, where puppetry is a major draw and where artists are experimenting regularly, there is a formal course conducted by Tehran University which people are very enthusiastic about, he said.

Back in India, puppetry is most popular in West Bengal, Rajasthan, Karnataka, Odisha, Bihar, Uttar Pradesh, Tamil Nadu and Kerala. Gupta and his group of six have been touring various parts of the country for their shows. In India, there are four types of puppets – string puppets, shadow puppets, rod puppets and glove puppets. In Bengal, puppetry is traditionally called the putul naach.

Mostly, the dramatic performances tell stories through using dolls – which background music, songs and dialogues – that the group members have created. Puppetry in India is largely sustained by the government’s grants and shows devoted to raising social awareness on issues like preventing dowry, deforestation etc. There are few people who purchase tickets to puppet shows and watch performances. For Gupta and others like him, to make this happen is a big challenge in cities.

Gupta joined the Calcutta Puppet Theatre in 1983 – his initiation into puppetry and formed his own group in 1990. He admits the audience is limited and there is scope for drawing in more people through innovation and experiments with the puppets and techniques. And therefore, the attempt to conduct a festival where people from different parts of the country can participate.