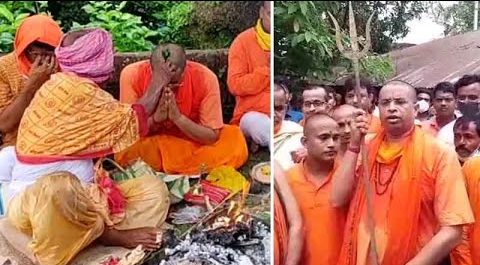 Bharatiya Janata Party (BJP) MP Soumitra Khan on Monday tonsured his head at a temple in Bankura, performed yajna along with his followers and took up a trishul, adding that he was handing over 90,000 trishuls to party workers. A trishul is considered to be a divine symbol, commonly used as a symbol in Hinduism.

Khan, who was elected from the Bishnupur Lok Sabha constituency in 2019, is also president of the Bharatiya Janata Yuva Morcha in West Bengal, the BJP’s youth wing. He said that the trishuls would help the BJP workers oust the Trinamool Congress from the state, which Khan along with his supporters, vowed to do outside the temple.

Clad in saffron robes, Khan performed a yajna outside a temple, and tonsured his head, a common religious custom in Hindu communities. Seven other BJP workers tonsured their head along with Khan. Khan then handed over trishuls to some of his followers.

All three acts – performing yajna, tonsuring head and taking up the trishul – are associated with religious practices, and the BJP MP performed these acts for taking a political vow of fighting the Trinamool Congress in the coming days. With state Assembly elections scheduled in 2021, such acts of merging of political and religious acts may tend to be more blurred in the coming days in the highly charged politics of West Bengal.

Khan’s act of taking up the trishul – its public display – and asking BJP members to take up the trishul to fight the ruling party, was met with resistance. Trinamool Congress senior leaders said it is banned under the law to display arms and action may be taken by the administration.