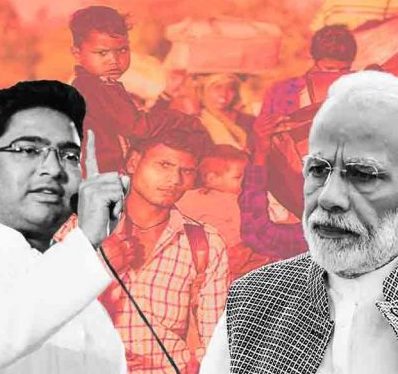 The Union labour ministry on Monday told the Parliament that there is no data on migrant deaths, so the question of compensation “does not arise”. The response was to a question whether families of those who had lost their lives while trying to reach their homes during the lockdown imposed to contain COVID-19, had been offered compensation.

The government gave a written response on this on the first day of the monsoon session. This reaction triggered sharp criticism and anger from among Opposition political parties. Congress leader Rahul Gandhi tweeted, “The Modi government does not know how many migrant labourers died and how many jobs were lost during the lockdown. If you haven’t counted, have the deaths not taken place? It is sad that there has been no impact on the government. The world has seen their deaths. There is a Modi government which has no information.”

The Union labour ministry added that 1 crore migrants had moved from their place of work to their homes in various states during the lockdown. Instead of the Question Hour, written questions and answers are being allowed during the 18-day monsoon session of the Parliament this time due to the outbreak of COVID-19. Staggered seating arrangement and other measures have been taken inside the Parliament in view of the pandemic.

Trinamool Congress MP Abhishek Banerjee tweeted on the Centre’s response as well. He wrote: “Absolutely zilch amount of data with @BJP4India Govt on the countless lives & jobs lost among migrant workers! Turns out that speeches by @narendramodi Ji & his ministers were nothing more than flowery words. Will there ever be an end to your inhumanity?”