Fresh lockdown to be imposed in parts of West Bengal? 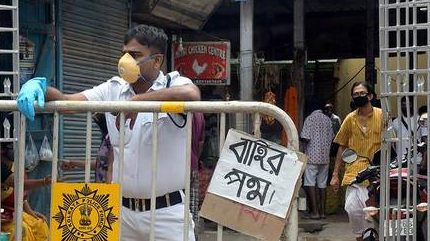 Top officials in West Bengal have been considering the possibility of imposing fresh lockdown in parts of West Bengal after a huge spike in the number of Novel Coronavirus (COVID-19) was reported over the past week. No final decision has been taken however.

The number of COVID-19 cases has especially gone up in the past few days this week – with over 800 new cases reported each day for the past two days. There were over 700 new cases the day before that. Total number of cases in West Bengal increased to 22,987 on July 6, with the number of deaths increasing to 779.

While the discharge rate has been a steady 66.27 per cent, the main reason for worry for the state government has been Kolkata and its surrounding districts Howrah, North and South 24 Parganas districts, apart from Hooghly. The number of cases in Kolkata has now increased to 7,389, with another 3,941 cases reported from North 24 Parganas, 1,553 from South 24 Parganas, and 3,218 cases from Howrah. Another 1,236 cases were reported from Hooghly district. Malda too, reported high number of cases – 859 – though it is lower compared to the areas in and around Kolkata.

While officials rule out total lockdown the way it was imposed earlier, there may be partial lockdown keeping economic activities going. Also, the officials said that lockdown may be imposed strictly in certain areas of the state, but not include areas where the situation is better.

Sources also said that the North 24 Parganas district administration has pleaded with the state administration to impose a fortnight’s lockdown in the district, and if it is imposed in certain areas of the district, it must include Bidhannagar, Barasat, Barrackpore, Basirhat among other areas. Malda district administration for one, has been mulling the closure of sweet shops temporarily, apart from imposing local restrictions in the markets. With the lifting of lockdown strictures, people are out on the streets, leading to huge increase in the number of cases.

The Karnataka government for one, has announced a 33-hours lockdown in Bengaluru and adjoining areas from 8 pm Saturday to 5 am on Monday to check the spread of COVID-19 in the region, which has seen a huge spurt over the past couple of weeks. Whether Kolkata and its surrounding districts go the same way remains to be seen.