Mamata Banerjee will hold her campaigns on wheelchair, meetings being rescheduled accordingly

She had 14 public meetings in the coming 5 days, which are being rescheduled The Trinamool chief was injured in East Midnapore’s Nandigram yesterday, a few hours after filing her nomination in nearby Haldia. She is contesting the coming Assembly elections from Nandigram. Banerjee has alleged that she was pushed from behind by four to five persons. She was rushed to Kolkata’s SSKM Hospital after she complained of swelling of her foot, breathlessness and being feverish. While the Opposition has alleged that she has “made it up”, doctors at SSKM said that she has “severe bony injuries in her left ankle, foot and bruises and injuries in right shoulder, forearm and neck”. She was admitted to the hospital last night and will perhaps remain admitted for two to three more days. 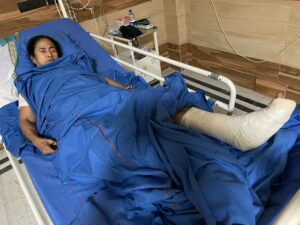 Doctors have advised her to not leave Kolkata for the next 72 hours. Her scheduled programmes are thus being altered accordingly, when she can actually be fit enough to participate in party programmes and address rallies. Between March 13 to 17, Banerjee had planned at least 14 roadshows and public meetings in five districts — Purulia, Bankura, West Midnapore, East Midnapore and South 24 Parganas, where elections are scheduled in the first two phases — on March 27 and April 1.