PM Modi calls for “Ashol Paribartan” in Bengal; “necessary for the state’s progress”, he says

Modi was speaking at a political rally in Hooghly's Sahagunj. 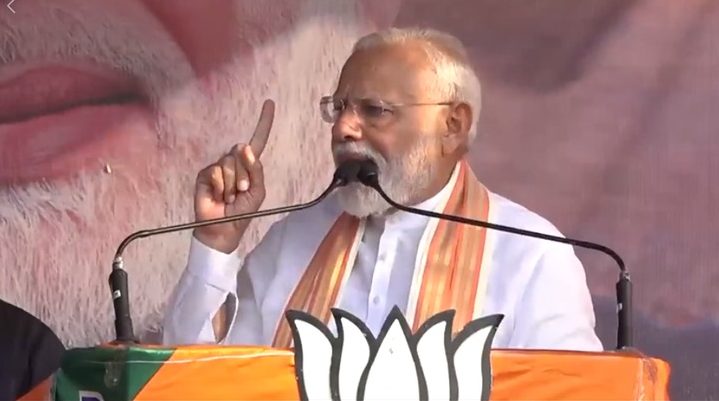 Prime Minister Narendra Modi – speaking at a political rally in Hooghly’s Sahagunj on Monday – said that “Ashol Paribartan” (real change) is needed for Bengal and its progress. Modi asked people to vote for the Bharatiya Janata Party (BJP) in the coming Assembly elections, stating that those who speak of “Ma Mati Manush” are standing in the way of progress in the state. “Ma Mati Manush” is the slogan of Bengal’s ruling party, Trinamool Congress.

Speaking at the meeting, Narendra Modi said that no progress is possible in the state till tolabaji (extortion) is stopped. “Even for hiring a place, a cut is required to be given here,” he said. He said that Trinamool Congress leaders in the neighbourhoods are flourishing because they are keeping a part of funds sent by the Centre for projects in the state. Mentioning a Central government project involving supply of water in homes, PM Modi said that out of the targeted nearly 2 crore families, only 9 lakh families had received the water connectivity. “Should women fetching water for their homes suffer so much? Do they deserve to suffer?” he asked. He also mentioned Rs 1700 crore sent to the state out of which Rs 609 crore had been used and the rest “vanished”.

Modi also mentioned the condition of closed jute mills, lack of jobs in the state, and compared it to the glorious days of Bengal of the past. He said the glorious days could be brought back and progress made only if the state could be rid of extortion and cut money for every project.

Speaking on PM Modi’s speech, Trinamool Congress MP Sougata Roy said that the jute mills in Bengal that are closed down are under the Central government. On the suffering for women, Roy said that projects introduced by Mamata Banerjee such as Kanyashree were indicators of what the Bengal CM has done for women in the state.