Rapid test for COVID starts in Kolkata from Thursday: results out in half an hour 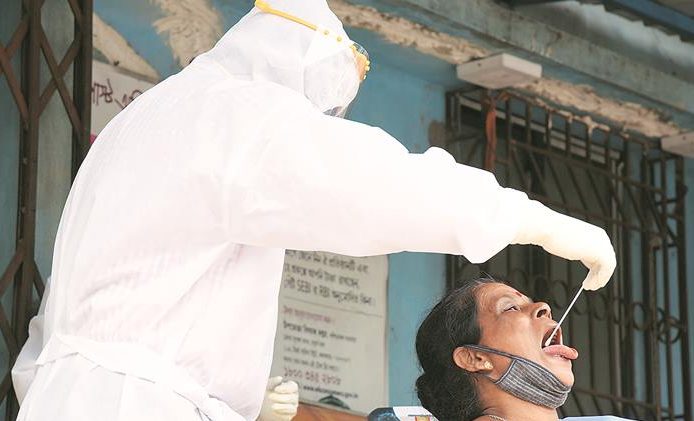 The Kolkata Municipal Corporation (KMC) has started rapid antigen test for COVID-19 suspects from Thursday. The rapid test results are out within half an hour. The tests started in Kolkata’s Chetla area on Thursday, and will be introduced all over the city soon, officials of the KMC said. Places where a large number of cases have been found are being identified to start the tests, and soon the facility will be extended to the entire city.

KMC administrator Firhad Hakim was present on the first day the rapid tests were being introduced. Those who were tested were also checked with oxymeter and their pulse rates were also measured by the health workers.

Alipore, Ballygunge, Chetla, Gariahat are some of the areas that will be selected in the initial days of the test. The rapid tests will cover the entire city within the next couple of weeks. Currently, the number of tests being conducted across the state is approximately 17,000 per day, and by mid-August, the state plans to reach a target of 25,000 tests per day. If the number of rapid tests gets added to this figure, the number may be much higher.

The KMC is already preparing a list of the areas to visit on the basis of prioritising which places are the worst affected in terms of containment zones. The containment zones and the surrounding areas will be thus first chosen for the rapid tests. Some of the areas where rapid tests will be done in the coming days include Ballygunge, Gariahat, Kasba, Park Circus, Park Street, Behala, Tollygunge, Phoolbagan, Manicktala and so on.

Rapid tests have a huge advantage for those who have symptoms as the test reports are out within half an hour and can lead a patient to take immediate initiatives for starting treatment. In many cases, delay in getting medical care have led to death of COVID patients, though medical practitioners have repeatedly assured that there should not be such fear around the virus. Swab tests are being collected by the KMC health workers every day, in association with the SSKM Hospital. However, this method takes time – nearly 2-3 days. But the rapid tests give the results much quicker and treatment and isolation can start moments after the tests.