Stuff Dreams Are Made Of: Inside Switzerland’s Maison Cailler Chocolate Factory 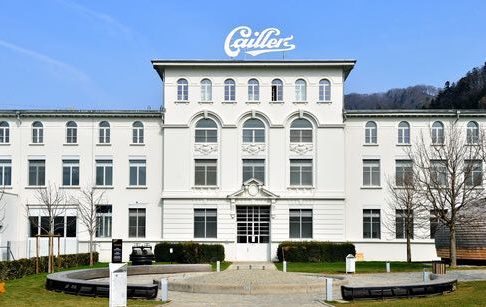 “All you need is love. But a little chocolate now and then doesn’t hurt.”
― Charles M. Schulz

There might not be any Oompa Loompas and golden tickets to deal with, no chocolate rivers to make your life dangerous and exciting, but the experience at the Nestle Cailler Chocolate factory and museum was no less magical than Roald Dahl’s imagination.

Cradled in a picturesque little village of Broc in Switzerland, the Cailler Chocolate factory and museum is undoubtedly “stuff dreams are made of”. This magnificent white building looks like a Richie Rich mansion from the outside, and is fairly in tune with the enchantment that awaits you when you walk through the doors.

You enter and exit through their own chocolate shop – where you can buy any and all chocolates Cailler has to offer, eat and treat yourself to a delicious hot chocolate before or after your tour.

Equipped with audio guides, you enter the museum thinking you will be loaded with statistics on chocolates and how they are made. And forget about half of it by the end of the day.

But the reality is far from it. Once inside, the world changes – every sight and sound and smell captivates you magically. You are no longer a mere mortal on a regular trip to a museum. As the aroma of cacao playfully meddles with your senses, you are transported to a different plane altogether.

You travel to distant lands, through myths, stories and history. Pictures, audio-visuals and special effects make the journey absolutely unforgettable. The entire paraphernalia leaves you mesmerized. You go from one room to another, and time travel through the evolution of chocolate.

The first part of the tour begins with the origin of coco in the Aztec Empire (Central Mexico). You learn that the word ‘chocolate’ comes from the Nahuatl (an old language spoken in central Mexico) word xocolatl, meaning ‘bitter water’. The Aztecs believed that cacao seeds were the gift of Quetzalcoatl, the god of wisdom, and the seeds were so valuable that they were used as a form of currency. It was originally prepared as a drink, bitter and frothy, mixed with spices or wine.  After its arrival in Spain in the 16th century, sugar was added and it became popular among the rich all over Europe.

Finally, you learn about the Swiss Willy Wonka – Francois-Louis Cailler – the first Swiss producer of chocolate, founder of the Cailler chocolate company. His great innovation was the development of a smooth chocolate that could be formed into bars. This became a worldwide sensation. In 1875, Daniel Peter, his son-in-law had combined their chocolate with his neighbor Henri Nestlé’s condensed milk to make the first milk chocolate. The Caillers and Peter eventually merged with the operation of Charles-Amédée Kohler (the inventor of hazelnut chocolate) to form the firm of Peter, Cailler, Kohler. The company was later purchased by Nestlé, in 1929.

The journey through the pages of history continues, as the tour takes you to another room, dusty and grey, with primitive black and white television sets showing images of one of the first chocolate TV commercials and also shows you the very first chocolate wrappers ever produced. It feels as if history has stopped for you, exclusively.

You continue the rest of the journey and experience with all your senses the processes of making and manufacturing chocolate. You can taste the almonds, hazelnuts, and cacao beans – along with first hand testimonies from the ingredient producers around the world. Finally, you get to watch the making of a chocolate bar from cocoa grinding to wrapping, and enter the last part of the tour. By now your wits are heightened with anticipation of finally biting into a freshly made chocolate. Before you enter the chocolate tasting room, you are given full instructions on how to enjoy the experience, how to distinguish between good chocolate and bad – through look, sound and taste. But by then, you just want to get straight to the point. Your gym trainers, diet salads and Fitbit trackers get regally ignored as you gorge on every kind of chocolate possible, your senses in perfect harmony with each other.

As you end the tour, you thank the Creator and the creation for a world which has love and chocolate – for a world that understands.

With hearts and belly both full, you slowly come out of the factory, still dreaming, dewy eyed, singing your happy song. Such is the magic of the Cailler Chocolate museum.