Surrendered Maoist Bengal-Jharkhand-Odisha border commander Ranjit Pal is now a father, wants to keep his daughter away from his painful past 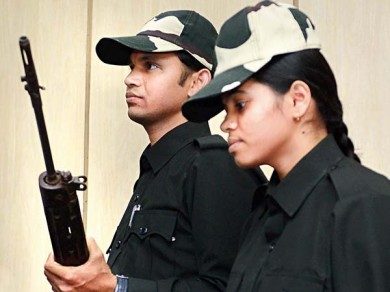 It is impossible to believe I had met the same person a year and a half ago. He has the same thin frame, the same hairstyle and thin moustache, but Ranjit Pal looks like a different person now. The new life – his life after surrender – reflects on his face, the happiness and calm is evident.

I wanted to meet his eight-month old daughter and wife Anita too. But Ranjit came alone. I had met Anita and Ranjit a day after their “official surrender” in January 2017. Now, they are proud parents, their daughter born in October that year, is now eight months old.

Ranjit has 50 cases against him in West Bengal and Jharkhand, which includes the high-profile murder case of Jharkhand Mukti Morcha (JMM) MP, Sunil Mahato. The Jharkhand government had announced a reward of Rs 25 lakh on him. His wife Anita – a former Maoist commander – also has several cases against her. In accordance with the Central and state government’s surrender policy on Maoist cadres, they were both offered jobs as special home guards with a monthly salary of approximately Rs 12,000 each by the West Bengal government.

Now, the couple’s life is centred around their daughter. “She wakes up at around 4.30 in the morning, even before we do. Then she plays all morning, takes an afternoon nap, plays all evening, and goes off to sleep by 9pm, just half an hour to an hour before we call it a day,” says Ranjit, his face beaming. His wife had major health issues before their surrender, and naturally, now with the baby, her health continues to be a worry, and Ranjit does a lot of housework and takes care of the child.

“Life has changed completely. Earlier we were running from one part of the forest to another. I was prepared to die any time. Now, I want to protect the child with my life,” he said.

Ranjit’s native village is in Bankura, and it is usual practice for a surrendered Maoist to get posting in his home district. However, he has been posted in Kolkata since his surrender. Ideally, he would like to stay back in the city because “a number of English medium schools are available here where fees are not so high. In small towns and districts, English medium schools have high fees”, he tells me. Ranjit wants his daughter to study in an English medium school because “it is impossible to survive without learning English these days.”

Jagori Baske, another surrendered Maoist from West Bengal, whom I met several times over the past seven years, spends a major part of the family income on her son’s school and private tuition fees. She has installed CCTV camera outside the main door of her flat (which she monitors on a computer screen) to keep track of visitors – her obsession solely to keep the child protected from the world she has left behind.

Ranjit and Anita feel the same urge to protect their child from their past – a past that was filled with bloodshed, hunger, police atrocities, protest marches, arms training, gunshots and a constant fear of getting killed. “We must protect her and take her away from the world where we belonged. Truth be told, it is a painful past. Like all parents, we don’t want our child to feel any sort of pain.”

A number of Maoist cadres had undergone vasectomy operation in Maoist camps because the party did not encourage couple to have children. The Centre has used the opportunity to offer reverse vasectomy to couples to make them surrender, so they could have children. This is common in Chhattisgarh and parts of Maharashtra, but unheard of in Bengal. The Centre and state governments know that many Maoist cadres are eager to leave the difficult life behind and want to have children and a “peaceful” life.

There are currently 356 surrendered Maoists in West Bengal alone, and the Maoist movement almost non-existent. In states such as Bihar, Jharkhand, Odisha, parts of Maharashtra and Chhattisgarh too, the movement is not currently in its best form.

Ranjit Pal, who was one of the senior-most Maoist leaders in West Bengal before his surrender, says it is impossible for the Maoists to stage a comeback in the near future. “There is disconnect between the Maoists and the people. There are no impressive leaders. Also, the CPI-Maoists haven’t improvised their tactics. The party is focused primarily on armed movement.”

Pal says there were scores of “frontal organisations” during the 1990s where workers from factories, intellectuals, students came together to fight for the marginalised, poor, working class. “But the party hasn’t been lenient in allowing frontal organisations to function independently, and they eventually perished. This also happened due to state action,” he said.

He thinks the same applies to People’s Committee Against Police Atrocities (PCPA) leader Chhatradhar Mahato and others like him, who were pushed to go underground rather than being allowed to function independently. “People were with them initially. But they grew tired of the violence. When government wanted work for development, they went with it.”

He thinks Maoists are more concentrated in hilly and forested regions of the country, and not where there are students, workers, farmers. “That was not the plan. Problems still exist. Issues are still there. But the Maosits are not where the people are,” he said.

Ranjit Pal says he didn’t surrender in order to live a “peaceful family life or because I wanted to have a child”. “Since I have surrendered, it is obvious one doesn’t live alone.” He feels the same applies to many others like him.

“Had everything been going well with the organisation, the urge to meet family members, to get married, have children, would not have been there. I was prepared to give up my life for the work I had chosen to do. I neglected my family, never regretted it. But since I know the revolution that we were planning, the social change we thought we would bring about won’t happen soon, I gave up that life. Now that I have made my choice, I chose to embrace everything that this life has to offer.”

(Cover photo: Ranjit Pal and wife Anita on the day of their surrender.)