The Sikhs of Kolkata: how they became an integral part of the city The history of the Sikh community in Kolkata goes back a long way. People believe that Guru Nanak – the first of the ten Sikh Gurus – had paid a visit to the city in 1508 en route Odisha’s Puri to meet the spiritual leader, Chaitanya Mahaprabhu. The ninth Guru, Guru Tegh Bahadur Singh, had also halted here on his way to Assam in 1667.

It is said that Gurudwara Bara Sikh Sangat on 172 Mahatma Gandhi Road (erstwhile Harrison Road) was set up by re-building the structure where both the Gurus had stayed. Kolkata, as a city though, hadn’t come into formal existence.

Today, the Sikhs are an integral part of Kolkata. The much frequented Punjabi dhabas and North Indian eateries all over town, the Sher-e-Punjab restaurant at Kolaghat outside the city (their cooks hail from Punjab and Kashmir), and the beloved taxi drivers are a part of Kolkata’s culture and heritage.

“The food at Sher-e-Punjab is unique because they still use the old-style clay ovens. They also make their own paneer,” says Rawel Singh Longani, who runs his family grocery store, opened in the 1950s by his grandfather in south Kolkata’s Jadubabur Bazar.

Sikh drivers driving the yellow taxis are few these days as most of them have now moved to the app cab business. Anil Kamal Singh, a resident of Behala, began his career as a cabbie. Then he drove heavy trucks – travelling across the length and breadth of the country – and currently drives his own app cab.

Some continue to drive the yellow taxis, and they are frequent visitors to Balwant Singh’s Eating House (more popular as Balwant Singh ka Dhaba) adjacent to the Gurudwara Sant Kutiya in south Kolkata’s Harish Mukherjee Road.

Right from dawn, people from all walks of life park their vehicles outside the Dhaba to have their breakfast, and drink hot milk tea or the special doodh cola (a mix of milk and cola with ice). Customers continue to pour in till late into the night.

It is believed that the much loved tadka (todka, as the Bengalis like to pronounce it) was earlier simply the Punjabi Maa ki dal, loved by the truck drivers at highway dhabas. But once it came to the city, the dhaba/restaurant owners realised that there was something “lacking” in it as far as the Bengalis were concerned. Hence, taking cue from Muslims cooks, the Sikhs began to add scrambled eggs into the dish. That’s how the egg tadka (followed by the chicken tadka) came into being.

In the beginning of the 20th Century, Calcutta, the capital of the British India, offered plenty of livelihood opportunities. Several factors contributed to the exodus of Sikhs from their home state. The last phase of the Singh Sabha Movement (that began in Punjab in the 1870s), Chenab colony peasant protests, changes in land revenue and water rates which were not conducive to practicing agriculture – are major reasons.

Kolkata, a port city provided an outlet to the outside world and the introduction of railways and surface transport were also contributing factors. Many had passed through the city earlier while serving in the British India army and while going to fight in neighbouring Burma and China.

Some had served as drivers in the Army, and therefore, while settling in the city they entered the transport sector quite naturally.

Part of the political scene

The Ghadar Party – an Indian revolutionary organisation formed by the people of Punjab in 1913 that had Sikhs, Muslims as well as Hindu leaders –

based in the US had active participation of people from Bengal – freedom fighters and intellectuals like Rashbehari Bose, Sachindernath Sanyal, to name a few.

Then, the Komagata Maru massacre is another link of the Sikhs with the city. It initiated a wave of imperial surveillance on Sikh migrant labourers. A ship named Komagata Maru was returning from Canada with around 350 passengers, (mostly Sikhs while some were Hindus and Muslims) after not being allowed to enter the country. It came back under close watch of the colonial apparatus and a gun fight broke out on 28 September, 1914 which eventually killed 21 people of those who disembarked at Budge Budge.

Several other ships which followed suit in returning from the West with South Asian immigrants (victims of racial injustice) were closely observed and faced repressive measures at the hands of the administration.

Sikhs continued to remain active in the political landscape of Kolkata till Independence. Taxi drivers and migrant workers were part of the Leftist Nau Jawan Bharat Sabha (NJBS) and trade union organizations. Some owed their loyalty to the Akali movement.

Genda Singh, an organizer of the Communist Workers’ Transport Union, was jailed in 1934 for a year of rigorous imprisonment. While the Sikhs are mostly known for being “defenders” of Hindus during the Great Calcutta Killings of 1946, their role in protecting Muslims remains largely unknown. The Jagat Sudhar Gurudwara near south Kolkata’s Rashbehari Avenue had one floor where Muslims were offered shelter and another floor allotted to Hindus, during the riots.

After Independence, several political and socio-economic reasons caused disruption in the livelihood of the Sikhs. In order to accommodate Bengali refugees from East Pakistan, the surface transport sector was opened up to them. The Calcutta State Transport Corporation was formed by the government with 25 bus drivers and conductors. Legislation enabled them to monopolise the running of buses within city limits. Other factors such as food shortage, a growing social unrest, the Naxalite movement, gradually led to the exit of Sikhs from this sector.

Then they took to plying heavy vehicles – trucks, trailers, tankers, freight carriers, long distance buses, outside the city. Also, an increase in population led to the spread of Sikh settlements in the outskirts of then proper Kolkata – to areas like Behala, Dum Dum and Dunlop. As a result, new Gurudwaras, eateries, schools, motor garages came up. Earlier, the Sikhs had settled only within the confines of Bhowanipore, Kalighat and Rashbehari areas. Some of former Prime Minister Manmohan Singh’s relatives live in the Behala area.

It was a turbulent time for the Sikhs in 1984 all over the country. Anti-Sikh riots following the murder of then Prime Minister Indira Gandhi dealt a blow to the secular fabric of the nation. West Bengal was in fact, the safest place for the Sikhs. The state administration was tough in handling hate mongers and there were 10 deaths reported in the state where hundreds died in other states.

Sohan Singh Aitiana, who runs a transport business in Kolkata, remembers those dark times and how the community showed gratitude to the then Marxist Chief Minister Jyoti Basu for the way the government did not allow the violence to spread.

Aitiana himself became a member of the Communist Party of India (Marxist) in 1986 and remembers how, when the Babri Masjid riots took place in 1992, he was asked by senior CPI(M) leader Biman Bose to go ahead and conduct langar (community kitchen) in the riot affected areas of Topsia and Garden Reach. 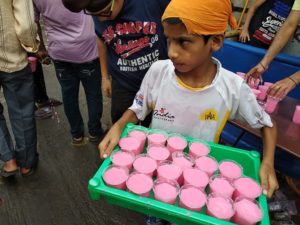 Despite large scale emigration of the third and fourth generation of Sikhs from Kolkata to countries like Canada, Australia and New Zealand, over 30,000 Sikhs continue to live like natural inhabitants of Kolkata, maintaining their culture, traditions, celebrating festivities like Guru Nanak’s birthday, Chabeel, Vaisakhi, etc, and taking part in the festivities of other communities in Kolkata with equal enthusiasm.