Thousands of dead fish found along river bank in UP 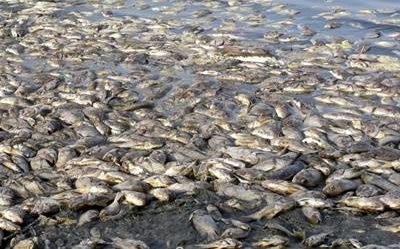 Thousands of dead fish were found along the banks of River Ganga within five kilometre of Kannauj and four kilometres in Unnao over the past one day. It is suspected that this has happened due to discharge of poisonous material into the water.

Samples of water and the dead fish were sent for analysis at the Forensic Sciences Laboratory (FSL) and the fisheries department of Uttar Pradesh.

Pilgrims and local persons first spotted the dead fish at Kannauj’s Mehandighat. Later, more dead fish was reportedly found in Unnao and Bilhur, it was reported.

Kannauj district magistrate Ravindra Kumar visited the spot along with experts of the Uttar Pradesh Pollution Control Board (UPPCB) and the National Wildlife Institute of India, Dehradun. Experts suspected that industrial units in Shahjahanpur discharged toxic material into Garra river.

According to UPPCB officials (add URL), downstream Garra river merges with the Ganga in Kannauj and the toxic matter may have flown right down to Kannauj causing such massive death of fish. Kumar assured the reasons would be made public by the weekend.

Regional officer of UPPCB Kuldip Mishra meanwhile said it was being suspected that this may have not have happened accidentally. Experts suggested the colour of water had turned pitch black near Nanamau, which raised suspicion of foul play.

The district administration asked panchayat employees to clear the area, warning people not to consume the dead fish because it may lead to diarrhoea, gastro enteric and liver disorders.