Who killed Khalida? The story of a Kashmiri schoolgirl found with a bullet through her head in 2007 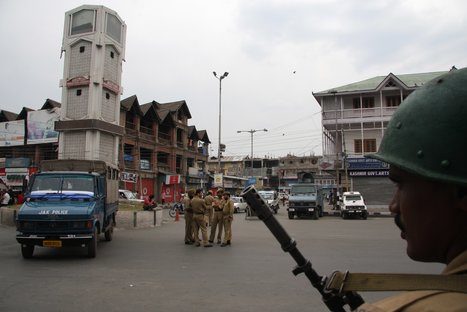 In Paliharan village, Baramulla district, Khalida was just another schoolgirl till 21 January 2007. When the day began, no one knew that she was soon going to become the talk of the day and in fact many more to follow. It was nearing 8.00 a.m. and for 22-year-old Khalida, the start of just another regular day. Was it?

As always Khalida dressed with care for school that cold winter morning. She scrubbed her face clean. In keeping with Islamic dictates, she covered her white uniform with an anklelong ‘abaya’. Next she took the scarf, secured it tightly ostensibly to hide her lustrous dark brown hair. But she let a few errant locks tantalizingly peep out. One to always push the boundary a little further, she took some more liberties. With bold strokes she lined her almond-shaped eyes with charcoal black kajal. Then she brushed her lips ever so lightly with pink gloss. Was she living up to being called ‘Preity Zinta’, the Bollywood beauty of Kashmir? Her bhabi, Sweety, and schoolmates admiringly called her so. Even the boys in town called after her by that name.

Her mobile phone started to jangle as she stepped out to start her 4-5 km trek to the highway to catch a bus for the Government Girls Higher Secondary School in Baramulla. She quickened her pace so her family could not hear her phone conversation. Then she ran back to tell her bhabi not to worry if she was late returning home. After school she planned to consult a doctor for a boil erupting on her leg.

Then she was gone. Some eight hours later Khalida was found dead. She had a bullet-hole bang in the centre of her forehead. The police, working on information given by a passerby, came across her body in an apple orchard in Yar Bugh, Rafiabad, miles away and in the opposite direction of her Baramulla school. She was lying pale and motionless, the blood from the bullet wound already caked dry.

Khalida had not made it to school that day. She was standing at the Baramulla main bus stop near her school that morning when a Tata Sumo pulled up and whisked her away. A few standing around saw it happen but no one thought that noting down the registration number of the car was warranted. No one even reported the matter to the nearby Sheeri police station.

As dusk fell her mother, Saja, kept worry at bay by assuming that Khalida had decided to stay back at her elder sister Mumtaza’s house in Dewan Bagh at Baramulla. She often did this. Her youngest brother, Sahil, had started to fret for his favourite sister. Then Saja noticed that Khalida had left behind the piece of embroidery she was working on. She always took it along when she was going to stay at her sister’s place as she liked to work at it in her spare time.

A nagging fear started to envelop Saja. It was only a month ago that a warning note signed by ‘the Hizbul Mujahideen boys’ had been pinned to their gate. ‘Khalida is a police informer,’ said the letter. It ordered her to mend her ways or face the consequences. Her old father, Habibullah Dar, had found the note as he was leaving for the mosque for namaz. Her brothers had torn the paper and trashed it. But Saja and Habibullah Dar had not been able to forget it.

This was not the only reason for worry for Khalida’s aged parents. Their Khalida had had many run-ins with the local police and had only a few day ago been released from prison. The police had accused her of links with her mama, her mother’s brother, Ghulam Mohammad Lone, a militant with the LeT who had crossed over to Pakistan. After he was killed in 2001 in an encounter with security forces when he sneaked back into a village near Baramulla in Kashmir, police alleged that Khalida had maintained her links with militants introduced to her by Lone. Her handler now was a LeT commander, Abu Anar. Police records allege that Khalida was a LeT ‘over-ground worker’. Her job was to carry messages and arms for its men. She also carried information relevant for their movement. She was booked by the police three times. Her three stints in prison caused a break in her education. Though in her twenties, she was still studying in Class 10.

Her first arrest was by the Baramulla police on 16 May 2002. She was charged with supporting crime. She was apprehended in old Baramulla town where she was with her mother and her brother Mohd. Yusuf Dar. After three hours they were allowed to go. Khalida was arrested and sent to Baramulla jail. She was released in 2003.

Her second arrest was a few months later in 2004, again by the Baramulla police. She was booked for eighteen months. After her release she went to live in the Nishat area of Srinagar. She returned to Baramulla in 2006. The Baramulla police and Handwara police arrested her for the third time later in the same year when she was allegedly on her way to Handwara to meet Abu Anar. He reportedly had a passport made for her to enable her to cross over to Pakistan. Khalida was arrested and sent to the Jammu district jail from where she was shifted to Srinagar jail by court orders and released in early January 2007.

Yet her family was not taken aback when at about 7.00 p.m., constable Ghulam Mohinuddin Khan knocked on their door. Khan was a neighbour. But what he said threw them into a state of shock. He said he had been telephoned by SHO Haider of Sheeri police post and tasked to inform them that their extrovert daughter, the beautiful young Khalida, had been shot dead.

The entire village went to see dead Khalida. She was lying in a police jeep, a blood-spattered shawl covering her pale face. A procession of stunned mourners brought her home and to her final resting place: 100 yards from her house, a simple unpretentious grass-covered mound of a grave in a corner of her elder brother’s kitchen patch. It was enclosed with tin sheets to keep away stray dogs. For Khalida to rest in peace, barbed wires were put up to separate the grave from the dirt track. From her brother’s hut which is barely a few steps away or even from the village road, Khalida’s grave is an easy miss. It seems to have been kept as inconspicuous as possible as if by design. No one wants to talk about why Khalida may have been killed.

The day Khalida was killed the police allege she was on her way to meet the militant comrades of her uncle Ghulam Mohammad Lone at Rafiabad.

Eight years after Khalida was found dead, I arrive at her modest home. I know I will never be able to see her, meet her or get to know her as a person. She will not be able to tell me why she exchanged the life of an innocent schoolgirl for the perilous one of a terrorist’s collaborator. I will never know if she was really working for her uncle’s jihadi comrades or had turned police informer or worse, a double agent? Was she aware that the dangerous game she was playing could snuff out her young life? Yet, I want to see for myself the environment in which she lived and operated, hoping it will give me a peek into the world of women who are as lethal as any armed terrorist or militant in Kashmir without taking up the gun.

… The family wants to know why Khalida did not reach her school on 21 January 2007 and was found shot dead instead in an apple orchard in Dudan. I too would like to know. All I am left with is suspicion and speculation. Did the militants gun her down because they suspected she was double-crossing them? Or was she eliminated because the police feared she would pass vital information about them to which she was privy, to terrorists? Militants as well as the police in Kashmir allegedly eliminate those they become suspicious of. Khalida was not the first to be handed out this fate, nor will she be the last. The Kashmiri women’s participation in militancy in their ‘watan’ is not only limited to certain roles, but is a completely hushhush affair. They themselves do not admit it to anyone, nor do the families. The high-profile names present themselves to the public as social activists, human rights crusaders and political activists while their work in some cases is directly or indirectly linked to facilitating terrorists and terror operations. Those who have the cover of anonymity do not need such screens. They just call themselves devout Muslims owing allegiance to jihad, or mujahideens and relatives fighting for the cause. The dictates of Islamic society do not give women the same status as men and this is reflected in Kashmir’s Islamic militant as well as separatist outfits. The women accept subjugation as adherence to the social and religious norms they are governed by. Leaders of terrorist organizations recognize women as vital to keep their business going but do not allow them into their ranks. No Islamic militant outfit is known to date to have a women cadre. Women are sent out on dangerous assignments that often risk their lives without any qualms on the part of the men in terrorist outfits, but the gun, a frontline role and an exalted position in the organization’s hierarchy is not for them to have. It is not permitted by Islam, argue militant as well as separatist leaders. Asiya Andrabi, the founding leader of the separatist Islamic group Dakhtaran-e-Millat (Daughters of the Nation) herself is of the opinion that a woman should not be tasked with anything that will expose her body as it is unIslamic. That is why a Muslim woman should be kept out of combat or never used as a human bomb because post-operation, her dead body will be exposed to all.

Excerpted with permission from She Goes To War: Women Militants of India, Rashmi Saksena, Speaking Tiger