Recent instances of successful students’ agitation at state-aided higher education institutions like Jadavpur University, Presidency University and Calcutta Medical College are indications that the West Bengal government’s attempt to remodel the system of college unions might be difficult to implement.

The Trinamool Congress government had issued an order a year back to make students unions apolitical that also took away their financial powers.

The West Bengal Universities and Colleges (Composition, Function and Procedure for Elections to Students’Council) Rules, 2017, say that the students’ council of colleges and universities “shall not use any banner or emblem of any political party in any manner during election or campaigning” and that “every student contesting in the election… shall be identified by his own name, class or section and roll number and nothing else”.

The elected student representatives won’t have any say in financial matters because the treasurers will be teachers or officials nominated by the principal (in colleges) or the Vice Chancellor (in universities).

How students react to the order

But this move – claimed by the government to depoliticise the atmosphere in colleges and preventing fund tampering – hasn’t been welcomed by students. Students feel it is aimed at scuttling their independent voices.

With two terms of no elections, Presidency University no longer has a functioning student union. Decisions such as allotment of funds are taken by the Dean and passed on to the students as instructions.

At Jadavpur University, the scenario isn’t much different either. Two terms of frozen union elections have led to the former general secretaries and assistant secretaries carry on in their positions. No new rank-holders have been elected.

For these colleges with a long-standing history of communist loyalties and ideologies fostered by students, the remodelling of the union model has inevitably drawn a lot of flak from the students who see it as the state’s attempt to scuttle voices.

In Jadavpur University, the three different faculties of Arts, Science and Engineering have separate student bodies that elect three different general secretaries for each department.

While the Engineering faculty student union chooses not to attach loyalties to external political parties, the department of Arts distinctly identifies with externally functional political groups.

Engineering union member Writo Mukherjee says, “The Engineering faculty students’body is run by a set of beliefs different from Arts. However, we too oppose the model of a single general secretary for the entire college and a deputy president for student bodies who is a professor or faculty member as proposed by the government. The basic tenets of all three faculties’ opposition remain the same. Why should students’ problems be passed through the scanner of a faculty member’s judgment?”

The Arts faculty students’ union, referred to as AFSU, assistant general secretary Ushashi Pal – member of the Communist Party of India (Marxist) students’ wing, Students’ Federation of India (SFI) – explains why political affiliations amongst students is needed. “It is very natural for students to adopt certain set of principles and ideologies which can align with that of functional political parties external to their institutions.”

Does she think the government order to depoliticise unions in colleges and universities and to remodel the unions will be successful? “We have held several protests and tried negotiating with the government. For any kind of complete change in the present model to be carried out, a three tier body consisting of a student faculty and government representative has to be formed. Without that, talks won’t go any further. We tried talking to the education minister and other officials, but they did not meet us.”

She said that they will consider themselves “victorious” when they are able to “hold elections again and re-elect new student leaders.”

At Presidency University, Shreya Chowdhury, a former contesting candidate from SFI said: “Student bodies have been dissolved. For two terms now new leaders are not being elected to the posts of student president or vice-president. Students of our university have been rebelling against the council model as student autonomy will suffer most. The head of the council shall be a teacher or staff member so ultimately whatever decisions are taken by the students, the final say rests with the head who is one of the authorities.” 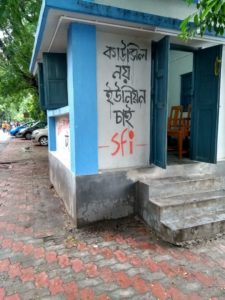 How good is the “model” from the students’ point of view?

The government’s model has been largely based on the way things function at St. Xavier’s College, Kolkata. Student bodies in St. Xavier’s are internal, and have little scope for external political influence or affiliations. There are college lobbies and students contesting elections but the process is more structured with a student parliament comprising of class representatives, and college society secretaries elects a single individual as the general secretary for the entire college.

Funds are handled by the general secretary with the money kept in the college’s student council account. Transactions from this and all other society accounts in the college are limited to Rs 10,000 per withdrawal, all under the supervision of the principal and other members representing the authorities.

One of the student society heads and former class representative from the college says on condition of anonymity: “While such a system creates for a foolproof and structured student administrative body, it also creates a hierarchy in the distribution of power. The college authority enjoys ultimate power and this also creates grounds for internal politics and nepotism. In its recent history, St Xavier’s College hasn’t had any woman general secretary. Recently, there was sudden uninformed fee hike by the college for a few self-financed departments, and there was hardly any protest from students. This would be unimaginable for a government college.”

Actual implementation of the order

There’s a long way to go before the government’s order is fully implemented. In a number of these institutions where the government felt “the need” to scuttle voices, there have been recent protests where students’ demonstrations and sit-ins have led the authorities to accept their demands. “It is true that there were no political party symbols in these sit-ins and demonstrations, but it was very evident that these were protests against the government decisions. These are voices against the government for sure. There may be attempts, but the voices still find ways to make themselves heard,” a student said.

It’s not that the supporters of the Trinamool Congress students’ union are happy about the government order. There is a resistance though not out in the open. Recently, after the admission procedure started in colleges, complaints began to pour in that students’ union leaders, especially from the Trinamool Congress, were demanding huge sums to ensure seats. While chief minister Mamata Banerjee has said anyone found extorting money from those seeking admission in state colleges will be punished, it has exposed the kind of influence leaders of political parties – especially party in power – exercises (or at least continues to try to do so) in educational institutions.

So when are the elections under the new system going to be held? No one knows for sure. There were talks about the possibility of elections in January 2019, but there is no confirmation. Sources say the Trinamool Congress may not be very keen in such an election ahead of the Lok Sabha polls, for fear of resistance. “There might be law and order issues, and it will be a huge risk then,” an official said.

The state government’s move may have aimed at curbing political “influence” or to rein in the students unions – primarily those under the Trinamool Congress union causing chaos and clashes at various college campuses for the past few years during admission before the order was issued.

However, students continue to argue about their rights to organize themselves as part of affiliated political ideologies. And the question remains whether a politics-free atmosphere can at all exist through imposing official rules.