Mamata Banerjee says she was “taunted in front of the PM”, attacks BJP for also insulting Bengal’s icons 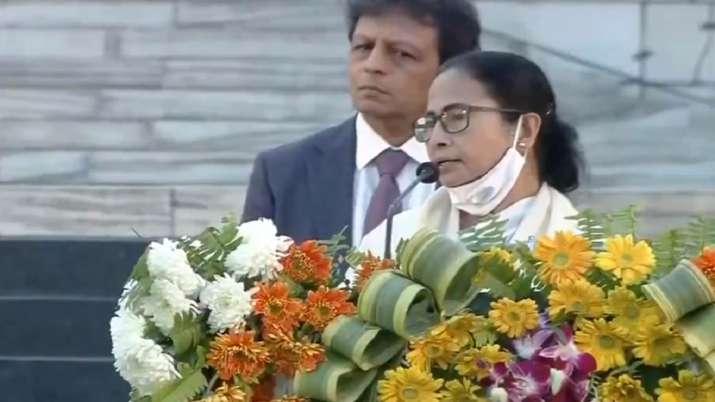 West Bengal chief minister Mamata Banerjee on Monday attacked the Bharatiya Janata Party (BJP) for insulting icons of Bengal – from Rabindranath Tagore to Vidyasagar, from Netaji Subhas Chandra Bose to Santhal leader Birsa Munda. She added that she was insulted in front of Prime Minister Narendra Modi by some “aggressive” people.

On Saturday, at a programme on Netaji’s 125th birth anniversary in Kolkata in the Victoria Memorial premises, Banerjee protested on slogans of “Jai Shree Ram” being chanted as soon as she was invited to speak at the dais. Prime Minister Narendra Modi was present at the time on stage, along with Governor Jagdeep Dhankhar. Banerjee refused to speak on the occasion on protest, but didn’t leave the stage as a mark of courtesy.  She said that a government programme ought to have some dignity, and no one had the right to insult her after inviting her to a programme.

“I went to a programme and some aggressive, fanatic people dared to taunt me in front of the PM. They don’t know me. If you point a gun at me I will show you the armoury. But I don’t believe in the politics of the gun,” Banerjee said at a public meeting today, in Hooghly’s Purshura.

She said that the BJP had insulted Netaji as well as other icons from Bengal. “They have named the birthplace of Tagore wrongly, they said he was born in Santiniketan, but he was born in Kolkata’s Jorasanko and built Vishwa Bharati in Santiniketan. They have destroyed the statue of Vidyasagar, and garlanded a wrong statue thinking it was Birsa Munda,” Banerjee said.

PM Modi calls for “Ashol Paribartan” in Bengal; “necessary for the state’s progress”,…