Rainfall in south Bengal on Christmas night and day after; temperature may drop from Dec 27 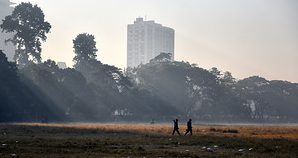 The districts of south Bengal may receive light to medium rainfall on Christmas night which may continue well into the next morning, the Alipore weather office has said. West Burdwan, Birbhum, Bankura, Jhargram and West Midnapore may receive rain on Christmas night while all of south Bengal is predicted to receive rainfall the following day. It may also rain in parts of north Bengal on December 26, officials said.
Rainfall in south Bengal will be caused by an existing anti-cyclonic circulation over Bay of Bengal. The circulation is likely to cause an incursion of warm moist air into the landmass of south Bengal which will meet the cold north-westerly prevailing over the region. The warm moist air rising upwards will thus cool down coming in contact with the cold air, giving rise to clouds that will bring rain to the entire south Bengal.
Kolkata’s night temperature for the Christmas night is predicted to be around 15°C.   The night temperature may rise gradually till December 27 after which it may come down again.

Thus, the New Years’ night and the following day might be chilly. The days in between are predicted to remain cloudy with foggy mornings. Heavy fog formation is predicted for North and South Dinajpur, Jalpaiguri and Cooch Behar for the next few days.