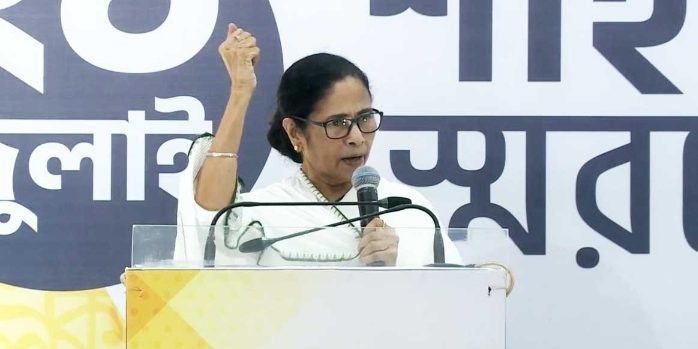 “The BJP is on a frenzied attack and bullying everyone into going silent. But we will fight them,” Banerjee said at a virtual meeting addressing the students’ wing of her party Trinamool Congress Chhatra Parishad (TMCP) on its foundation day. The students, leaders and other party followers were at a sit-in on Mayo Road, protesting the Centre’s decision to hold the NEET and JEE examinations in the first week of September amidst COVID-19 and floods in several parts of the country.

At the meeting, Banerjee said, “The BJP is threatening and terrorising everyone all over the country, and many are silent due to these repeated terrorising tactics. But we will not remain silent. We will protest, and when we emerge victorious, it will show the rest of the country the way forward.” She said that tomorrow’s India will follow Bengal and the fight in 2021 – when Assembly elections are scheduled in the state – will show them the way. “It is one thing to fight a pandemic, but the political turmoil and threat is also necessary to fight,” she said, calling out to the student leaders and followers, explaining to them the party’s position.

Banerjee said she was not afraid and was ready to go to jail, and highlighted the need to fight the BJP. “We die only once. There is no need to die everyday,” she said.

At a meeting called by Congress chief Sonia Gandhi and Trinamool chief Mamata Banerjee two days ago, chief ministers of Opposition political parties decided to put up a fight against the Centre’s various policies, and decided to move Supreme Court requesting for postponement of JEE and NEET examinations.

On that day, Banerjee had asked, “Should the states be afraid of the Centre? If any questions are raised, some officers and political leaders are being threatened with action. Should we then not raise our voices? Should states lose their independence in the federal structure in democracy? If that happens, it will soon be one-nation, one political party”. During that same meeting, Maharashtra chief minister Uddhav Thackeray had raised the same concerns. “We have to decide whether we want to fear or fight the government,” he had said.

On Friday, Banerjee made the same argument and highlighted the need for Trinamool Congress to fight the BJP politically.