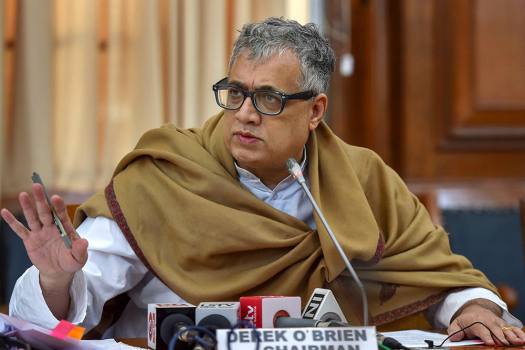 The Trinamool Congress on Saturday accused Union Home Minister Amit Shah of “gross misrepresentation of facts” in his letter written to West Bengal chief minister Mamata Banerjee. In his letter, Shah had written that the Bengal government was not allowing trains from other states to enter Bengal, thus doing “injustice” to migrant labourers and had subjected them to “further hardship”.

In an online press conference, senior leaders of the Trinamool Congress, Derek O’Brien, Kakoli Ghosh Dastidar and Rajib Banerjee alleged that the letter is politically motivated rather than about feeling concerned. O’Brien said that 80,000 people have already been brought back to Bengal by various modes of transport by the state government. Eight trains are scheduled to bring back over 30,000 people from other states. The trains will arrive from Karnataka, Punjab, Tamil Nadu and Telangana. The entire task of bringing back these stranded people will be carried out in seven phases, he said.

Derek O’Brien added that the Bharatiya Janata Party (BJP) should not say that the trains have been allowed after Shah’s letter to the CM. He said that Mamata Banerjee had written to chief ministers of 18 states as early as March 26 requesting them to take care of migrant workers stranded there. Such an effort was made by her before the CMs of any other state, he said.

He added that Bengal government has already brought back over 2,000 students from Rajasthan’s Kota by buses. The CM had announced this in a tweet on April 27. Over 2,500 migrant workers, students, pilgrims and patients have arrived Bengal from Kerala and Ajmer earlier this week.

The Bengal government has also set up an automated e-Pass system on its website for allowing those stranded in and outside the state to return to their homes in respective states, and to bring back to Bengal those who have been stranded outside. This includes those who can make their own travel arrangements.

Referring to these and the newly announced special trains, Derek O’Brien said that the letter by Shah is not based on facts and accused him of “suddenly waking up from his slumber and thinking of attacking Mamata Banerjee” to malign the image of Bengal.