Smriti Irani, Union Minister (Textiles and Women and Child Development ministries) on Friday drove a two-wheeler in a Bharatiya Janata Party (BJP) rally in Sonarpur, South 24 Parganas district, prompting the ruling Trinamool Congress to mock at her as “copying” Bengal CM Mamata Banerjee. The Trinamool chief and Bengal CM had driven an electric scooter in Kolkata yesterday to protest the hike of fuel prices. 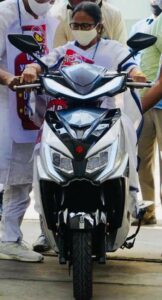 On the Trinamool’s page “Banglar Gorbo Mamata”, on Facebook, the party used a meme and wrote  #IraniCopiesDidi and added “Copy cat BJP, some originality please!” On Thursday, Mamata Banerjee had a spin around the city on an electric scooter to protest the rising price of petrol, diesel and cooking gas. 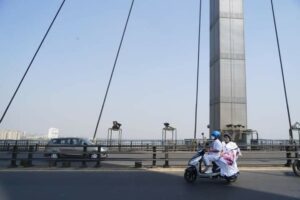 Smriti Irani, however, did not drive an electric scooter. On her bike ride in West Bengal today, Bengal cabinet minister Firhad Hakim said: “For the BJP, the price of petrol and diesel is of no importance, and that’s why they can ride those bikes.” Yesterday, he drove the electric scooter with Mamata Banerjee being the pillion rider. Later in the day, Banerjee herself drove the scooter for sometime.